Source to all birds on the Planet
admin
Corvidae, Middle America, Passeriformes
Comments 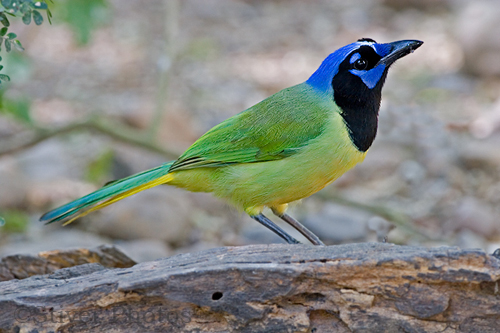 Listen to the sound of Green Jay

Brush, woodlands. In Texas, most common in dense native woodlands in the lowlands dominated by acacia, ebony, and hackberry; also lives in
more open mesquite brush and stands of short oaks, and in some suburbs with native vegetation nearby. In the tropics, often in humid forest in foothills and lower mountain slopes.

Pair or family group may defend territory throughout the year.
Nest: In Texas, site is in dense tree or shrub, usually 5-15′ above the ground. Nest (built by both sexes) is a bulky but loose cup of sticks, thorny twigs, lined with rootlets, grass, moss, and sometimes leaves.
Eggs: 3-5. Pale gray to greenish white, heavily spotted with brown and lavender. Incubation is by female only, about 17-18 days. Male may feed female during incubation.
Young: Both parents bring food for nestlings. Young leave nest about 19-
22 days after hatching. Young remain in parents’ territory through nesting season of following year, then are evicted. In some tropical areas, these one-year-olds help with feeding young in nest, but those in Texas apparently do not.

Omnivorous.
Feeds on insects, including beetles, grasshoppers, crickets, true bugs, wasps, and many others. Also eats spiders, centipedes, small rodents, lizards, eggs and young of small birds. Feeds on plant material including various seeds, nuts, berries, small fr
uits.
Behavior: Forages by moving actively throug
h trees and shrubs, examining the foliage for food; drops to the ground for some items, and sometimes catches insects in midair. Cracks open hard seeds and nuts by pounding them with bill. Will come to bird feeders for a variety of items.