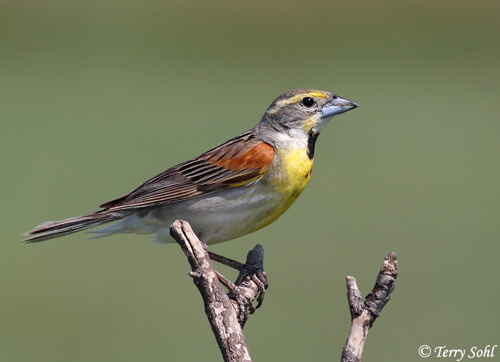 A grassland bird; often travels in large flocks. Sits on fenceposts. Male: Suggests a miniature meadowlark (black bib, yellow chest). In fall the bib is obscure or lacking. Female:
Very much like a female House Sparrow, but paler, with lighter stripe over the eye, touch of yellow on the breast, and a bluish bill. The chestnut shoulder is also an aid.

Listen to the sound of Dickcissel

Alfalfa and other fields; meadows, prairies.
Originally nested in native prairies and meadows. Today, many nest in fields of alfalfa, clover, timothy, or other crops. In migration, may be found in any kind of grassy or weedy fields.

In many areas, numbers of nesting Dickcissels are wildly variable from year to year. Males arrive on breeding grounds about a week before females, and sing to defend nesting territory. One male may have more than one mate.
Nest: Site is usually on or near the ground, typically well concealed in dense growth of grass, weeds, alfalfa, clover, or other plants. Sometimes placed in shrub or low tree, up to 6′ above ground
, exceptionally higher. Nest (built by female) is a bulky open cup made of weeds, grass, leaves, lined with fine grass, rootlets, sometimes animal hair.
Eggs: 4, sometimes 3-5, rarely 2-6. Pale blue, unmarked. Incubation is by female only, about 12-13 days.
Young: Nestlings are fed by female only. Young leave the nest about 7-10 days after hatching, are unable to fly for several more days.

Mostly insects and seeds.
Insects make up majority of diet in early summer; included are many grasshoppers, also crickets, caterpillars, beetles, and many others. At other seasons, may feed mainly on seeds, including those of weeds and grasses, also cultivated grain.
Behavior: Forages mostly on the ground and in low vegetation. Except when nesting, usually forages in flocks.

Southern Canada and interior of United States. Winters mainly from Mexico to northern South America. Very rare migrant and winter visitor to California. Migration:
Migrates in flocks, sometimes in flocks of many hundreds. Strays reach both coasts in autumn. Rarely found in our area in winter except along Atlantic Coast, where a few may spend the season at bird feeders.