Source to all birds on the Planet
admin
Cardinalidae, Passeriformes, South America
Comments 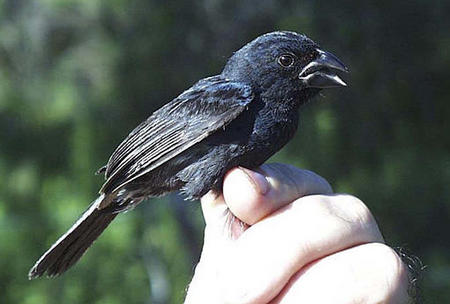 It has been found in stands of spiny Guadua latifolia and Ripidocladus spp. bamboo forest, and at least four of the recent localities the birds were in or next to stands of Guadua angustifolia

Its bill shows some degree of specialisation for feeding. From stomach content analysis of collected specimens it is known to feed on weevil spp. which may be specific to its spiny forest habitat

This recently described species was known from a single location where its habitat has now been destroyed. It has since been found at several locations near to the type locality, but it is likely to have an extremely small population occupying a tiny range. Further surveys are urgently needed, but on current knowledge it qualifies as Critically Endangered.
Habitat at the type locality was all destroyed during the development of the Guri Dam, which subsequently flooded this location. This development also destroyed other potentially suitable habitat in this area. Total forest clearance is the principal threat to any other populations that exist