Source to all birds on the Planet
admin
Africa, Alaudidae, Passeriformes
Comments 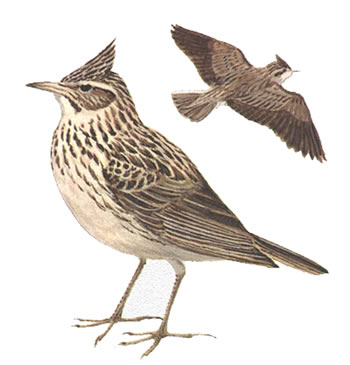 Listen to the sound of Thekla Lark

Variety of habitats, mainly open areas with sparse vegetation, also cultivated land and other man-made semideserts such as railways, airfields, and wastelands. Where it co-occurs with the Thekla lark, the crested lark occupies the plains, the Thekla inhabits rocky and bushy slopes.

Diet of the Thekla Lark consists mainly of vegetal food; seeds and green plant material taken from ground or picked directly from plants. Also food remains in horse-droppings are exploited. Animal (mainly insects) food taken to larger extent during breeding season, but proportion is negligible during rest of the year. Young fed with insects and worms.

Largely migratory in north of FSU breeding range. Mainly resident elsewhere; some dispersal occurs, but scale uncertain. Apparently sedentary in North Africa and Middle East, where birds show much subspeciation and adaptation of plumage colour to that of local soils.