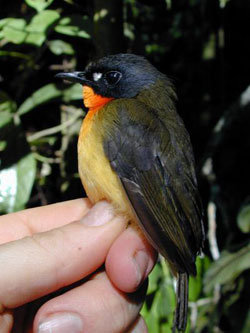 This species has forehead and crown blackish gray. Nape dark gray with slight Olive-Green wash increasing at the bacxk of the head. Back and rump olive-green. Rectrices fuscous fringed slightly browner than rump and same color as the upper tail coverts. Remiges brownish-olive narrowly fringed with olive-green. Wing coverts gray with olive fringing. Wing lining whitish and axillaries creamy yellow. Malar and eye ring black. Loral spot white. Chin and throat orange. Upper breast dark orangish ochre with feather fringes on sides of breast gray. Lower breast and belly creamy yellow with under tail coverts slightly darker. Flanks and sides gray Iris dark brown, bill black, legs and feet pink-gray. The full distributional range of the new species is not known, it was found in Gabon.
It is a locally common bird, but like other members of the genus it is unobtrusive and its presence is made known mainly by its call. Our visual observations were mainly in response to playback of vocalizations. Its ground dwelling behavior is typical of other members of this genus. Observations and encounters were mostly in primary lowland forest with light to moderate undergrowth. In open primary forest with heavy grazing by elephant and forest buffalo that greatly reduces undergrowth, the bird appears uncommon or even absent.
download discovery article
← Previous Post
Next Post →