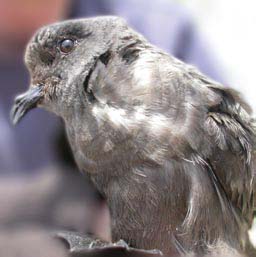 The Ashy Storm-Petrel is a seabird that nests in small rock cavities on islands off the coast of California. From 50 to 70 percent of the breeding population is located on Southeast Farallon Island in the Farallon National Wildlife Refuge and on Californiaâ€™s Channel Islands. With its already small population having declined by perhaps half in the last 50 years, the Ashy Storm-Petrel should be listed as endangered, although the U. S. Fish and Wildlife Service lists it instead as a â€œdeclining species of management concern.â€ Given its limited range, the species could be decimated by an oil spill or other local event.

The greatest threat to the Ashy Storm-Petrel is nest predation by nonnative species, such as house mice, rats, and cats, that have been introduced onto and are taking over Californiaâ€™s coastal islands. The storm-petrels also fall prey to an expanding population of Western Gulls. There is also evidence that pollution of foraging areas is putting this species under stress.

Because the Ashy Storm-Petrel is nocturnal and nests in places largely inaccessible to humans, monitoring its population trends is difficult. BirdLife Internationalâ€™s best estimate for 2005 was a population of five to ten thousand, based on the 1995 Birds of North America account by David Ainley, which is itself based on surveys by H.R. Carter et al., published in 1992 and subsequently updated to BirdLife.

Stronger efforts to control invasive mammals on islands where the Ashy Storm-Petrel breeds would enhance the populationâ€™s viability, as would strict enforcement of anti-pollution regulations for coastal waters. Audubon supports listing of this species under the Endangered Species Act.