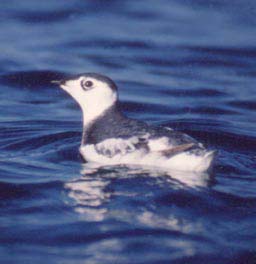 Kittlitzâ€™s Murrelet is a small seabird found in the coastal regions of Alaska, where it feeds on fish and macro-zooplankton in areas where glaciers meet saltwater. It nests a few miles inland in the mountains and on cliff faces. Over recent decades, its local populations are estimated to have undergone precipitous decline, including a drop of almost 85 percent in Prince William Sound, as much as 75 percent in the Malaspina Forelands, and more than 80 percent in the Kenai Fjords area. Ornithologists consider it critically endangered but, because much about the ecology of this species remains unknonn, the U.S. Fish and Wildlife Service has not listed it.

The major threat to this bird appears to be rapid changes in its tidewater glacial habitat due to global warming. The species is also negatively affected by the growth in local oil tanker and cruise ship traffic, and by oil drilling, as well as by devastating spills such as that of the Exxon Valdez in 1989.

Based on estimates by U.S. Fish and Wildlife Service biologists, BirdLife estimated the population of Kittlitzâ€™s Murrelet at 13,000 to 35,000 in 2005. The bird is difficult to count at either breeding sites or foraging areas, so designing a repeatable census technique is an important first step in conservation planning.

Because it is not federally listed as endangered, little is being done to protect the Kittlitzâ€™s Murrelet. That said, guidelines for avoiding the disturbance of nesting birds have been established. Audubon supports listing of this species under the Endangered Species Act.