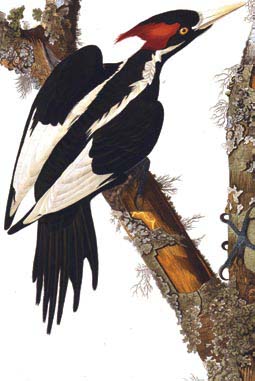 The Ivory-billed Woodpecker once ranged widely across the southeastern United States, including Texas, Arkansas, Louisiana, Mississippi, Tennessee, Alabama, Florida, Georgia, South and North Carolina, as well as in Cuba. As logging reduced the hardwood and pine forests that constitute its habitat, however, the bird became increasingly rare. Indeed, having not been seen in the United States since 1944 or in Cuba since 1987, the species was believed to be extinct. In 2004, however, ornithologists working in the Cache River and White River national wildlife refuges in Arkansas caught sight of the ivory-bill and later recorded its distinctive knocking cadence. Understandably, both excited and apprehensive about going public with their discovery, they waited until the bird had been spotted by a half dozen people and its image captured on videotape before announcing their find in April 2005.

The primary threat to the Ivory-billed Woodpecker is habitat loss due to clear-cutting of its bottomland forest habitat for agriculture and forest products. The bird is also threatened by water diversion and channelization projects that affect bottomland forests.

Only a single bird was seen in each of the 2004 and 2005 sightings. Recent efforts to confirm the existence of the Ivory-billed Woodpecker have brought neither sightings nor sound recordings that can be definitively attributed to the ivory-bill, but the search continues.

Since the 2004 sighting, a federal recovery team has been working to prevent the extinction of the Ivory-billed Woodpecker. Audubon is working with the U.S. Fish and Wildlife Service, the Arkansas Game and Fish Commission, the Nature Conservancy, Cornell University Laboratory of Ornithology, and other conservation groups on a comprehensive plan to save the species. Enabled by $10 million in federal funds and donations from many conservation groups and private citizens, the plan includes conserving and enhancing the birdâ€™s habitat; continuing to search for additional birds and active nest cavities; educating the public, bird watchers, and hunters about what is required for the birdâ€™s survival, and better enforcement of the Endangered Species Act.