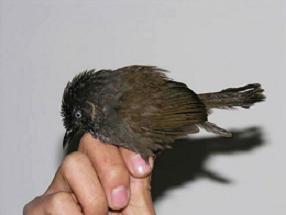 It has relatively short, rounded wings and medium-length rounded tail; wings longer than tail; relatively strong legs; medium-length straight bill; stiff forehead feathers; oval nares; and general body proportions. It is of relatively large size, it has a dark-grayish-brown body and chin; broad dark-grayish-brown spots on white throat and upper breast; white crescent-shaped patches behind ear coverts and black bill. The principal habitat for the species is the seasonal rainforest. The Nonggang Babblers were often seen walking on rocks and were seldom seen in trees or flying. The birds flew only short distances, and only when frightened. The behavior of S. nonggangensis is similar to that of wren babblers (Napothera spp.), with which it co-occurs in this area. Nonggang Babblers often forage in the gaps between two rocks by turning over the fallen leaves, apparently preying on insects and other arthropods.
Sometimes they foraged on the small mounds that appeared after the trees were logged. They were seen only in single-species flocks in winter. They occurred in flocks of 5-10 individuals in the nonbreeding period but were often seen in pairs during the breeding period. The known distribution of S. nonggangensis is limited to the Nonggang Natural Reserve.
download discovery article
← Previous Post
Next Post →