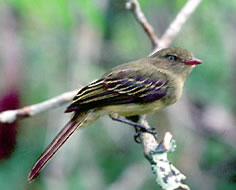 Rather non-descript greenish-yellow tyrannulet. Uniform olive upperparts. Most of underparts also olive, but this grades into yellow on the belly and undertail coverts. Wings dull black with faint olive cast and fringed (along with median and greater coverts) with yellow. Similar spp. Differs from sympatric Slender-footed Tyrannulet Z. gracilipes in having pinkish lower mandible. Voice Song is a simple series of two to four evenly spaced notes, the first being longest and each subsequent note being shorter. Zimmerius villarejoi is known only from an extremely limited habitat type in the RÃ­o Nany drainage near Iquitos, Loreto, and a 1912 specimen taken from Moyobamba, San MartÃ­n, Peru. It is confined to ‘varillal’ habitat – poorly drained, 12-18 m tall forest on white sand soils. The species’s distribution seems to coincide with that of two or three tree species. It is uncommon and very patchily distributed. The diet includes small arthropods and fruit, notably the berries of the mistletoe Oryctanthus alveolatus. Most of the known range is within a protected area. However, the limited extent of appropriate varillal habitat, and the continuing extraction of trees for building materials and posts, means that much of the population is threatened or at least compromised. Outside the protected area, the few varillales in which the species is known to occur (on the upper Rio Nanay) are completely unprotected, and are currently being heavily exploited for timber and other products. Alonso, J.A. & Whitney, B.M. (2001) A new Zimmerius tyrannulet (Aves: Tyrannidae) from white sand forests of northern Amazonian Peru Wilson Bulletin 113: 1-9
download discovery article
← Previous Post
Next Post →