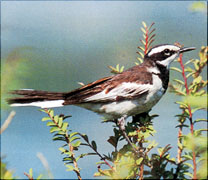 Motacilla samveasnae is known, in the breeding season, from a substantial length of the River Mekong and several of its tributaries in Cambodia, extending upstream from Kampi into southern Laos, and there is a record from the non-breeding season in Thailand. In optimal habitat, linear densities may reach many pairs per kilometre, and its numbers are certainly healthy in Cambodia. It breeds in riverine “channel mosaic” habitat, typically in broad, lowland rivers, where the streambed is exposed to provide rocky outcrops and bushland, gravel shoals and/or sandbars, tufted grasses and annual dicotyledons. Mekong Wagtail most closely resembles the widely disjunct African Pied Wagtail M. aguimp, though it differs in several minor respects, particularly wing pattern, and vocally it is highly distinct. Moreover, mitochondrial DNA comparisons show that divergence between Mekong Wagtail and African Pied Wagtail is greater than between any of the other black-and-white wagtail taxa, and it also exhibits clear differences in moult strategy and habitat choice. It is highly distinctive, being the only black-and-white wagtail in South-East Asia exhibiting the adult/first-adult plumage character combination of a black forehead, lores and ear coverts, striking white supercilia, a white throat and white neck patch.
(J. W. Duckworth et al. A new species of wagtail from the lower Mekong basin Bulletin B.O.C. 121, 3 (2001): 152-182)
← Previous Post
Next Post →