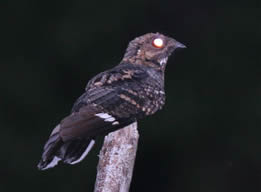 Found in scrubland with scattered small trees or at the edges of open forest. It is encountered inside dense forests or at the edges of dense forests. The species is characterized as common along forest edge and in wooded cultivation. C. meesi occurs sympatrically with C. affinis on Flores and Sumba. It is possible that C. meesi occurs syntopically with C. affinis at some localities. On Flores, the former inhabits scrubland, the latter inhabits ‘steppes’ and that both species meet in savanna with scrub (‘GebÃ¼schsavanne’). At Lewapaku, Sumba, C. affinis sings in flight over dry grassland and C. meesi singing from nearby small trees in the same dry grassland but closer to forest. Observed was C. meesi singing only from exposed perches at c. 5-10 m above the ground. No singing was observed from birds in flight. Feeding occurs in flight and as sallies from exposed perches that were also used as song points. At Riung, Flores, they were observed flying over the sea and mudflats to the mainland at dusk. Very little information is available about breeding. Available evidence suggests that territorial songs are given from June to November. It is as yet unclear if C. meesi also sings during other times of the year. An egg collected on 11.x.1956 at Djinggor, Flores was originally identified as an egg of C. affinis by its collector J.A.J. Verheijen but was later referred to C. macrurus by Mees (1977) and is therefore most likely referable to C. meesi. In his discussion of the breeding seasons of birds on Flores, Verheijen (1964) reported that nests and eggs of C. affinis were found from August to November, with a peak in September.
Sangster, G. & Rozendaal, F.G. 2004. Systematic notes on Asian birds. 41. Territorial songs and species-level taxonomy of nightjars of the Caprimulgus macrurus complex, with description of a new species. Zool. Verhand., Leiden 350: 7-45.