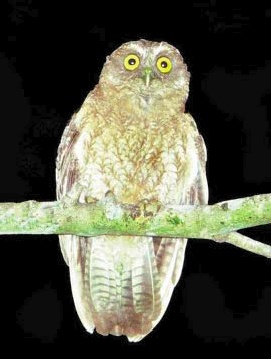 Since the late 1980s, an unknown owl of the Genus Otus has been reported on the island of Sumba in Indonesia. Through DNA testing, this Owl has now been identified as a Ninox owl, but different to Ninox novaeseelandiae (Southern Boobook Owl), Ninox scutulata (Brown Hawk Owl) and Ninox rudolfi (Sumba Boobook) that are present in Indonesia. Ninox sumbaensis was recently formally described, although the taxa has been known to ornithologists since the late 1980s. It is currently very poorly known and has only been recorded from three localities on Sumba, Indonesia. It appears to be limited to patches of primary, disturbed primary and secondary forest from 600-950 m on Sumba. Survey work is required to ascertain the distribution and status of this poorly known owl which is undoubtedly at some risk from ongoing habitat loss. The face is Grey with white eye-brows, while the crown is greyish with fine barring. The bill goes from horn to yellow at the tip. Eyes are yellow.
The throat is rufous with dark stripes and the lower breast is white with dark stripes. Upper parts are light brown with fine, widely spaced dark brown stripes. Scapulars are white. The underside of the flight feathers are barred rufous and cream, and the upperside is barred rufous and dark brown. The tail has 12-13 dark brown bars on a light rufous-brown background. The legs are feathered on the front down to the toes, but almost bare on the back. The toes have bristly feathers on the top. Feet are yellow, as are the claws, which have have a grey-black tip. (owlpages.com).
Olsen, Jerry; Wink, Michael; Sauer-GÃ¼rth, Hedi & Trost, Susan (2002): A new Ninox owl from Sumba, Indonesia. Emu 102: 223-231.