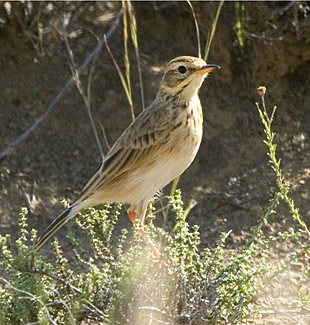 A recent study of the evolutionary relationships between pipits suggested the existence of a previously undescribed species. Molecular evolutionary relationships in the avian genus Anthus. DNA evidence indicated that a freshly-collected specimen from Kimberley, South Africa, which was originally identified as a Long-billed Pipit Anthus similis, is more closely related to Malindi Pipit A melindae than to Long-billed Pipit. Subsequent comparisons of the specimen revealed several differences with Long-billed and other pipits, including Malindi Pipit. Now, after several years of field work, the pipit is named Kimberley Pipit Anthus pseudosimilis. Kimberley Pipit differs from the sympatric Buffy Pipit A vaalensis and Plain-backed Pipit A leucophrys in having a streaked back and breast. It differs from African Pipit A cinnamomeus in having darker brown streaks on the back, a more extensive breastband with generally heavier streaking, and by its larger size. Although difficult to differentiate from Long-billed Pipit, it differs by a different wing formula and primary emargination, a shorter bill, a longer hind-claw, a more distinct cream supercilium, rufous ear-coverts and black malar stripe; it also differs from Long-billed Pipit in habitat, behaviour and breeding biology. Compared with Kimberley Pipit, Malindi Pipit of coastal Kenya has heavier streaking on the back, a thinner malar stripe and streaking on the belly and flanks. Kimberley Pipit is now known from 17 specimens and several confirmed sight records, all from the interior of South Africa and south-western Namibia. Where it occurs, Kimberley Pipit is fairly common and appears to be sedentary, although some winter movements may occur. The bird was first discovered as a winter visitor to Kimberley. It has been found 70km to the west in the late spring and it would appear to occur at Springfontein in the southern Free State the whole year round. Here at Garingboom Guest Farm I have found eight breeding pairs and Dr Liversidge visited us to do sonograms of their very distinctive display-calls . The best help in the field is their selection of habitat, body language, feeding and displaying behaviour , voice and tail movements. The birds can be picked up at a distance by their upright stance with a slender body and the long tail and comparetively long bright orange legs. They run longer distances than the other pipits and wags its tail downwards. The slightly rufous earcoverts, very prominent eye strip and yellowish flanks are seen in breeding season and their distinctive courtship flight and calls are diagnostic as well. The proposed name of this new specie and specimens come from Kimberley and Rooipoort in the Northern Cape and from Springfontein and Phillipolis in the Southern Free State. Liversidge, R & Voelker, G 2002. The Kimberley Pipit: a new African species. Bull Br Ornithol Club 122: 93-109.
← Previous Post
Next Post →