Source to all birds on the Planet
admin
conservation, Picidae, Piciformes
Comments

Several cases of this species existence in Arkansas and Florida (USA) have been made since 2004, but the evidence is never unchallenged. Extensive surveys have been made in south-eastern Cuba, but the last record remains of 1987. The number of individuals is now very likely tiny. This 50 cm huge black-and-white woodpecker is overall black with large white wing-patch, with white areas on mantle and a typical stripe on side of neck from the lower edge of ear-coverts to the mantle. It shows white underwing-coverts separated by black from the white secondaries. It was found in both bottomland hardwood and montane forests in the U.S.A. and Cuba. The first requirement of any habitat is dead trees, which provide for beetle larvae, its primary food source. It forages by stripping bark from dead trees, using its bill like a chisel, it will also take fruit, nuts and seeds.

Campephilus principalis formerly occurred throughout the south-east U.S.A. (nominate principalis) and Cuba (subspecies bairdii). It was undisputely last recorded in north-eastern Louisiana in 1944. It was rediscovered in 2004 in Arkansas, watch the evidence in the film below. The sound and video recordings warranted extensive surveys for the presence of Ivory-billed Woodpecker in 2009, none were found in the Big Woods region. South Florida has large areas of suitable habitat and there are many reports from there in recent decades. Until hard evidence is obtained, the species is considered possibly extinct. The species may survive in Cuba, although with the lack of recent records and physical evidence, this subspecies also may well be extinct. 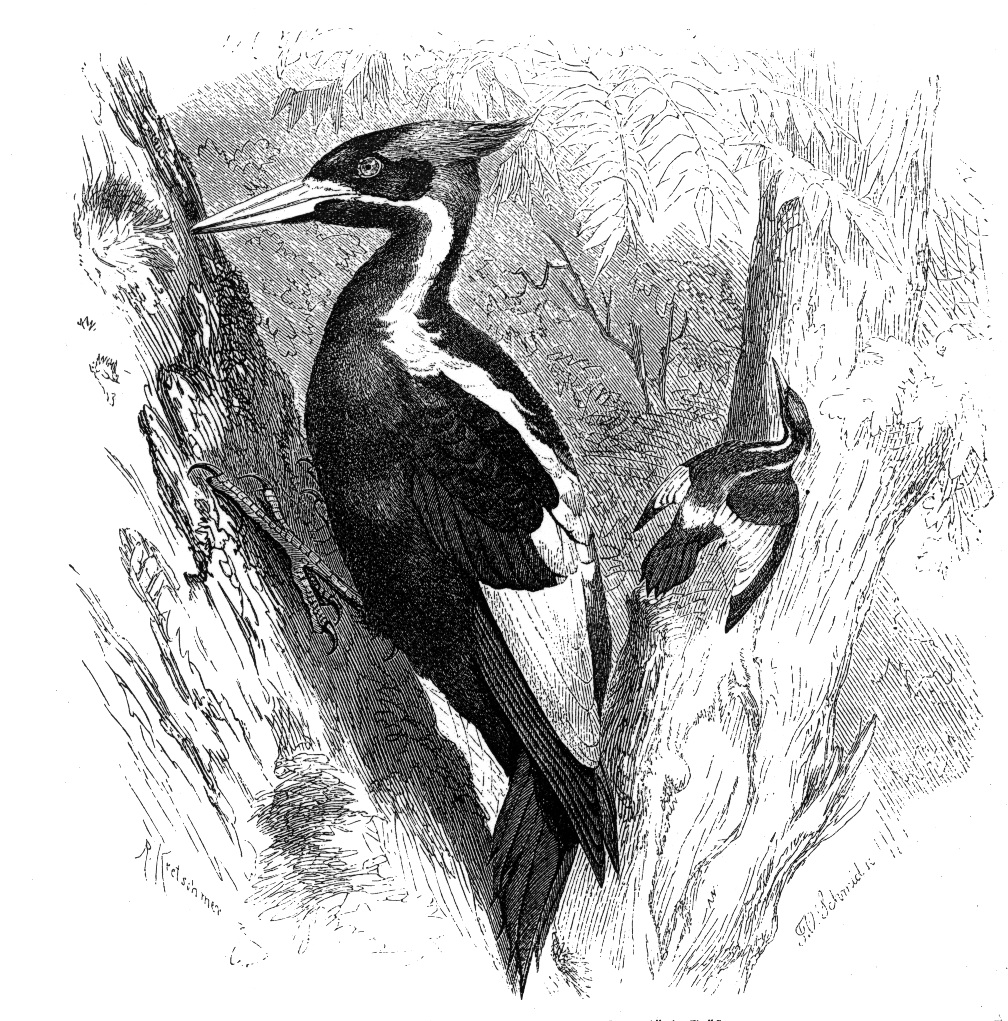 A 2010 study into the burden of proof consisting of sound fragments, unconfirmed sightings and an extinction prediction model, supported the view that this species is very likely extinct. However, considering the specific natural history traits of large woodpeckers, small numbers of Ivory-billed Woodpecker may have persisted up to the present, but very large surveys are needed to detect small populations.

Logging and converting forest to agriculture land are the main reasons are for the decline of this species. Hunting also contributed to its rapid population decline.

After the reported rediscovery in February 2004, intensive surveys involving dozens of observers, automatic cameras and recording equipment have been carried out in the Big Woods area. In Cuba there have been a number of searches for the species, it remains elusive. As soon as a population has been detected, nest protection, training guards and raising common awareness will be measures to be taken. Now a vintage video from 1935.

We, at Planetofbirds, think this delicate species with its large range, and its specific feeding and habitat demands, can not be saved. Already in 1900 this was written:

In the early settlement of this section the Ivory-bill was very common, but since the country has become settled, the species, naturally wild, has retired to the unfrequented parts of the forest and is rarely seen here now. It will be seen from the foregoing, that in many instances the accounts are modified with the statement that the species is extremely rare as compared with past years, or else has disappeared from the localities entirely. Probably this is not altogether owing to the actual decrease in the numbers of the birds, but to its extreme wildness and desire for seclusion;â€” Savage liberty is a pre-requsite of its existence, and its home is the depth of the woods remotest from the activities of civilized man. As a result many of those regions which were formerly its haunts have been abandoned for the wilder and more inaccessible parts of the forest. 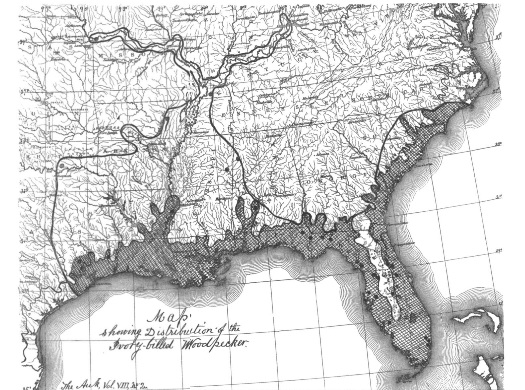 The Seminoles (Indian tribe) knew this bird and called it Kit-Kal. They told the story that during a contest of strength it tapped so hard with its bill that the blood and brains flew out of the back of its head. This species has been a forgotten and neglected species during the past century. Its rapid decline had been noticed at least 125 years ago, still we lost it. Now, 2014, all that is left are crocodile tears, we obliterated this liberate and seclusive natured species, always searching for its undisturbed haunt, until none was left. The Log-God’s typical call is silenced.
← Previous Post
Next Post →