Source to all birds on the Planet
admin
Accipitriformes, folklore
Comments

During the short Greenland summer the Eskimos live along the seacoast. They put up their strange skin huts and hunt and fish and make merry through the season when the sun shines at midnight.
Now in places along the Greenland coast there are steep high cliffs. Here the birds which fly farther north in summer make their nests.
Often, as the Eskimo sits by his campfire, he hears the half-angry, half-sad cry of “Kea! Kea! Kea!” Looking up then, he often sees a lonely eagle sitting on the highest, most desolate cliff.

The Eskimo father laughs when he hears this cry and sees the lonely bird on the cliff top. Then the little Eskimo children creep nearer to their father with certainty that a new story is in store for them.
“Tell us the story of the eagle!” the Eskimo children cry eagerly.
This then is the story which the Eskimo father tells to his little ones “in their funny furry clothes.”
“Long, long ago in a tiny Eskimo village, there lived a strange-looking old woman. Her neck was so short that she really looked as though she had no neck at all and as though her head was set upon her shoulders.
“People laughed when they saw the funny-looking old woman. Some were so unkind as to make fun of her strange appearance.
“This unkindness made the old woman very unhappy. 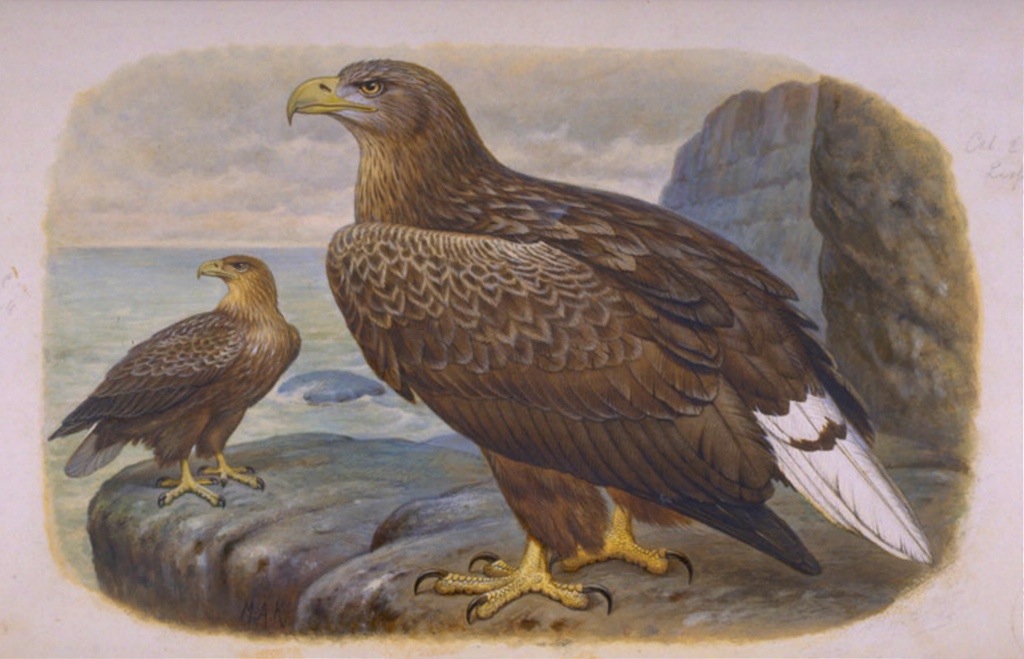 “By and bye the children of the village went every day to the hut of the old woman to play.
“They teased and tormented her. If she raised the bearskin curtain at the doorway and spoke to them they did not heed her.
“‘Short neck! Short neck!’ the rude children shouted. Then they stood and laughed at her.
“So it came that the poor old woman grew more and more unhappy. To escape her tormentors she often climbed to the cliff tops and sat on the edges of high rocks where it was difficult to follow.
“Here, safe and quiet, she would sit for hours. Sometimes in her loneliness she raised her arms above her head and cried aloud.
“The people of the tiny Eskimo village often saw the lonely figure on the cliffs. They noticed that the old woman stayed less and less in her little snow hut in the village.

“Then one morning an Eskimo child, looking up, thought she saw the old woman sitting as usual on the rocks. But the child’s brother said that he saw only a strange bird with a very short neck.
“At that moment the bird raised its wings and flapped them above its head.
“‘Kea! Kea! Kea!’ cried the strange new bird. ‘Kea! Kea! Kea! who was it called me short neck?’
“‘Ah,’ said the children’s father, looking up from his fishing-nets, ‘I think you both were right.'”
← Previous Post
Next Post →