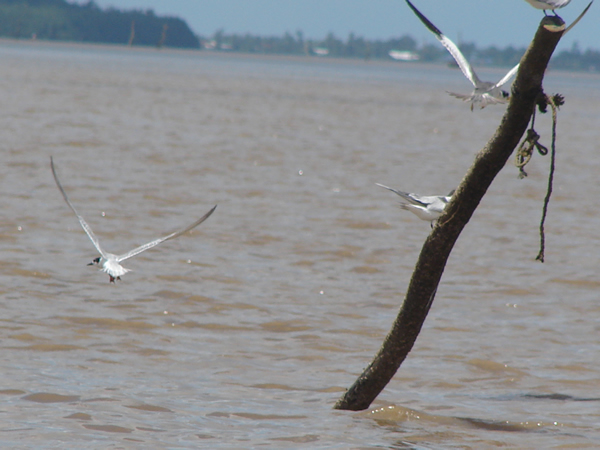 The Gull-billed Tern (Gelochelidon nilotica) has until recently received little conservation and managementattention within North America despite a relatively low overall population size and significant declines inparts of the breeding range. This lack of attention may stem in part from the wide distribution of the species, encompassingparts of six continents, and from its tendency to nest in relatively small, scattered and often ephemeralcolonies. Populations of North American subspecies are alarmingly small. The current population of the easternsubspeciesaraneain the U.S. is unlikely to exceed 3,600 pairs, with over 60% of these birds occurring in Texas. TheTexas population has remained generally stable, but declines of populations in Maryland (where probably extirpated),Virginia, North Carolina, Florida, and possibly Georgia give cause for concern for this subspecies. For the westernsubspeciesvanrossemi,as few as 250 pairs nest at only two locations in the U.S., both in California. Whenpopulations in western Mexico are considered, the entirevanrossemipopulation numbers only 600-800 pairs. Currentlythe Gull-billed Tern is listed as ‘endangered’ or ‘threatened’ in four states, and is considered to be of managementconcern in five others
KATHY C. MOLINA AND R. MICHaeL ERWIN, Waterbirds 29(3): 271-295, 2006