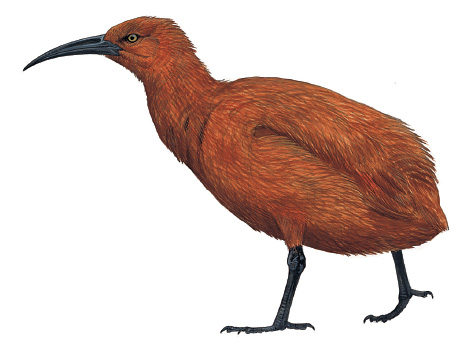 Scattered among the seventeenth century written accounts and illustrations that relate to the celebrated Dodo are descriptions and pictures of a flightless bird of a rather different kind. These pictures show a creature that in overall shape and appearance looks something like a kiwi. A long, down-curved beak, rather hair-like plumage and stout legs all add to this impression. The bird in question bore no genuine relationship to the kiwis, however. It was a rail and, like the Dodo, it came from the island of Mauritius. Like its more famous fellow, the Mauritian Red Rail or Red Hen failed to survive the coming of Europeans by more than a few decades.
The Dutch arrived on Mauritius, with devastating effect, during 1598, and it is highly doubtful if there were any red “hens” left a century later. Peter Mundy, an English traveller who penned fascinating reminiscences of his exploits, described the species as:
A Mauritius henne, a Fowle as bigge as our English hennes…of which we got only one. It hath a long, Crooked sharpe pointed bill. Feathered all over, butte on their wings they are soe Few and smalle that they cannot with them raise themselves From the ground…They bee very good Meat, and are also Cloven footed, soe that they can Neyther Fly nor Swymme.

Mundy was recalling events of 1638 and the fact that he and his companions got only a single individual surely indicates that the species was already rare. Earlier accounts suggest that the birds gathered in flocks and were fatally attracted to the colour red. By means of a piece of red material they could be induced to approach and then, of course, they were caught.