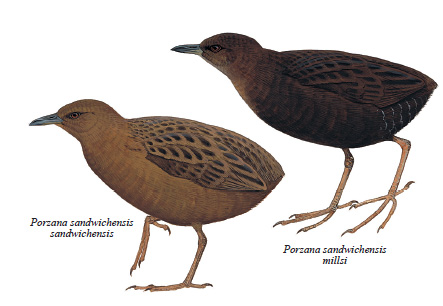 A small species of rail once inhabited the main island of Hawaii and perhaps some other Hawaiian islands. A handful of specimens exist in the museums of the world but these have in themselves caused some controversy. Two of them are rather paler in colour than the rest, giving rise to the idea that there may have been two species rather than one.

This claimed second species is herein tentatively treated as a separate race, millsi. On the other hand the general consensus of informed opinion is that the paler individuals may simply be immatures. Apart from the probability that these birds were extinct by the end of the nineteenth century, nothing is known of them.