Source to all birds on the Planet
admin
Gruiformes, Rallidae
Comments 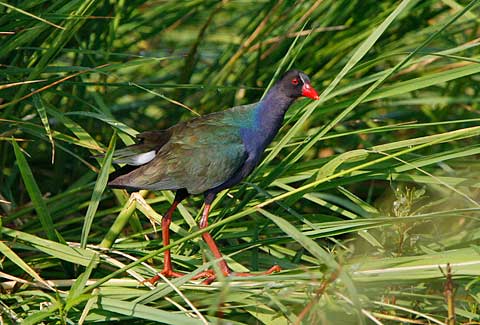 They are similar in size to the only slightly larger Water Rail. The Allen’s Gallinule has a short red bill, greenish back and purple upperparts. They have red legs with long toes, and a short tail which is white with a dark central bar underneath. Breeding males have a blue frontal shield, which is green in the female. Immature Allen’s Gallinules are sandy brown with a buff undertail. The downy chicks are black, as with all rails.

Its breeding habitat is marshes and lakes in sub-Saharan Africa. Remarkably, this apparently weakly flying bird is not only the only species with a purely sub-Saharan African range to have reached Great Britain, but has done so twice. It has also occurred as a vagrant in several other European countries.
This species is an intra-African migrant. At the onset of the rains populations in the northern tropics move north and populations in the southern tropics move south, although some may remain sedentary all year round in permanent wetlands. The timing of the breeding season varies geographically in relation to seasonal rainfall, the species breeding in territorial solitary pairs with nests well spaced even when many pairs share the same area. In favourable conditions the species may occur at high densities and in very large numbers, although it is more commonly found alone, in pairs, or in family groups. The species undergoes a flightless moulting period shortly after breeding, and is mainly diurnal, being most active in the early-morning and late-afternoon.
No sound impression of Allens Gallinule

The species shows a preference for wetlands with water-lilies and other floating vegetation, and frequently occupies and breeds in seasonal or temporary habitats. Suitable habitats include freshwater marshes, inundated grasslands, flood-plains and river deltas (e.g. Okavango Delta) with grasses and sedges, reedbeds, papyrus swamps, rice-fields, and thick vegetation (sedges, grasses and reeds) beside lakes, rivers, ponds and temporary pools.

Found in dense vegetation around lake margins, papyrus swamps and lily ponds. This is a very shy bird which is adept at swimming and diving, it is also often seen climbing through the vegetation (indeed it will climb up to 2m to get to food and even builds small platforms to enable it to feed on seeds and fruits of taller vegetation). However most of its food is taken from the water or is gleaned from under leaves or from under dead vegetation. It has a varied diet which consists of molluscs, earthworms and other small invertebrates as well as small fish. It also eats seeds and fruits from the marsh reeds, grasses and thorn scrub as well as unripe water-lily seed heads. Interestingly this species is known to be kleptoparasitic, particularly when it comes to lily seeds, it has been observed stealing these from Pygmy-geese.

The nest is a loose structure of reeds, sedges and other vegetation typically positioned in reeds, grasses or tangled vegetation at the waters edge and also in open marshes and rice-fields. Clutch size is 2-5 eggs, no inforamtion on incubation or fledging period.

This species has a large range, with an estimated global Extent of Occurrence of 16,000,000 kmÂ². It has a large global population estimated to be 25,000-1,000,000 individuals (Wetlands International 2002). Global population trends have not been quantified, but the species is not believed to approach the thresholds for the population decline criterion of the IUCN Red List (i.e. declining more than 30% in ten years or three generations). For these reasons, the species is evaluated as Least Concern. (source Birdlife.org)