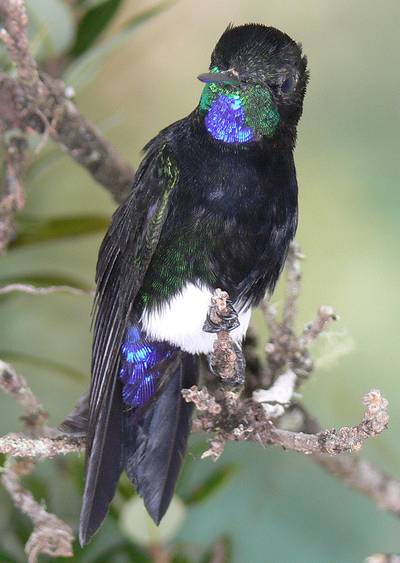 The highly distinct new species is characterised by an enlarged, bicoloured iridescent throat patch (hence ‘Gorgeted’) in males and white tufts above the legs which are characteristic of ‘Puffleg’ hummingbirds. The flamboyantly coloured Gorgeted Puffleg Eriocnemis isabellae, a new species of hummingbird, has been discovered in Colombia. But there are concerns over its future safety because the Serrania del Pinche mountains where it was discovered are unprotected. Ornithologists Alexander CortÃ©s-Diago and Luis Alfonso Ortega made three sightings of the new hummingbird during surveys in 2005 of montane cloud forest in the Serrania del Pinche, south-west Colombia. The Gorgeted Puffleg (Eriocnemis isabellae) is a hummingbird endemic to Colombia. This species was discovered in 2005, but not confirmed as new until 2007. It faces the risk of extinction, and therefore a status of Critically Endangered has been recommended: its only known habitat, the cloud forests of the Serrania del Pinche (Choco region), is under threat by agriculture, especially coca farming.