Source to all birds on the Planet
admin
Africa, Galliformes, Phasianidae
Comments 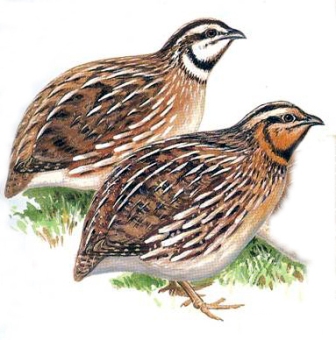 In spring and summer throughout continental and (less regularly) oceanic middle latitudes of west Palearctic, from margin of boreal through cool and warm temperate to steppe and Mediterranean zones, generally avoiding extremes of heat or cold, aridity or humidity, and exposure to strong winds. Prefers wide open spaces, with level or undulating landforms and normally clear of trees and bushes, up to 1000 m and occasionally much higher. Stops short of snow, ice, or persistent frost, and prefers drier, sunnier aspects on light, well-drained sandy, chalky, or peaty soils. Chooses seasonally dense, moist but not wet herbage, tall enough for complete concealment, but normally not growing as high as 1 m, and usually clear of hedgerows or forest edge. Has adapted well to large cultivated fields, especially of winter wheat and clover. Similar natural vegetation (e.g. Molinia grassland) also favoured, as well as meadows and meadow-like wild grasslands such as steppes. On migration, occurs along coasts, and even on fairly small marine islands, as well as in other atypical situations such as desert fringes and oases.

Listen to the sound of Quail

Quails are generally found in drier areas, in open fields with small bushes where they take cover and under which they look for the seeds and small insects that they feed on.

The nest is built by the female in a shallow hollow lined with some vegetation, well-hidden among shrubs and grasses. Just one clutch of 7 to 12 eggs is laid annually. Only the female sits on the eggs and hatching takes two to three weeks. The female then looks after the chicks which very soon start to fly and pick at the ground in search of food. It is believed that the male mates with several females during the same nesting season.

Omnivorous: mainly fallen seeds (predominantly of field weeds and gleanings of cereals) and invertebrates (chiefly insects) found on ground by using feet and beak to scratch and scrape.

This species has an extremely large range, and hence does not approach the thresholds for Vulnerable under the range size criterion (Extent of Occurrence <20,000 km2 combined with a declining or fluctuating range size, habitat extent/quality, or population size and a small number of locations or severe fragmentation). Despite the fact that the population trend appears to be decreasing, the decline is not believed to be sufficiently rapid to approach the thresholds for Vulnerable under the population trend criterion (>30% decline over ten years or three generations). The population size is extremely large, and hence does not approach the thresholds for Vulnerable under the population size criterion (<10,000 mature individuals with a continuing decline estimated to be >10% in ten years or three generations, or with a specified population structure). For these reasons the species is evaluated as Least Concern.
Coturnix coturnix is a widespread summer visitor to much of Europe, which accounts
for less than a quarter of its global breeding range. Its European breeding population
is very large (>2,800,000 pairs) and fluctuates, but underwent a large decline during
1970-1990, especially in central and eastern Europe. Although the species increased
in northern and central Europe during 1990-2000, declines continued in south-eastern
Europe, and the total population size probably remains below the level that preceded
its decline. Consequently, it is provisionally evaluated as Depleted.
This bird inhabits a major part of Europe and Asia, from the Iberian Peninsula and the British Isles to northern India and China. It is also breeding in northern, eastern and southern Africa. The European populations are wintering in North Africa and the Sahel region. The population of the European Union is totalling 400000-800000 breeding pairs. It is strongly fluctuating, and its trends are often difficult to notice. Overall it seems to be definitely decreasing however. This decline is largely due to agricultural intensification, disappearance of uncultivated areas and widespread use of pesticides. It is also subject to a strong hunting pressure in some Mediterranean regions and is badly affected by the increasing Sahel drought. These facts mainly affect the long-distance migrants from central and Eastern Europe, much less the birds of France and Spain wintering in north-western Africa

Majority of West Palearctic breeding birds believed to winter South of Sahara, mainly in Sahel zone, but some winter as far North as British Islands and Germany, and with some regularity around Mediterranean. Birds of these populations do not seem to cross over equatorial forest, migration routes believed to vary individually, and from year to year. Birds that winter in Central & South India believed to migrate through Pakistan, before dispersing throughout Indian Subcontinent. South African birds may move North to winter in Angola, Zaire, Namibia and Zambia, where species is probably non-breeding-visitor.