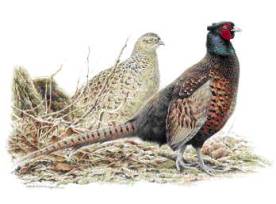 The Pheasant is a large, dramatic bird, approaching nearly 90 cm, with a long, pointed tail. The female pheasant is drab and mottled brown. The male is more boldly colored with a darker, mottled body, a white collar, or ring, around his neck, and an iridescent blue-green head with a bold red patch around the eye. The population has many different subspecies, so variation in coloring is common.
In the winter, Pheasants often appear in segregated flocks, males in small groups and females in larger groups. Typically feeding on the ground, they uncover food by scratching with their feet or digging with their bills.

Listen to the sound of Pheasant

Pheasants are found along edges of open fields, brushy hedgerows, and forest edges. They thrive in the vast tracts of wheat fields in eastern Washington. They often inhabit marshy areas and are rarely found in dry areas. Prime habitat in Washington appears to be cattail and willow patches near irrigated farmlands.

The male defends a territory that may house a small harem of females who nest on the ground in the dense cover of alfalfa, wheat, or hay. Females build their nests in a shallow depression in the ground, lining them with grass, leaves, and weeds. Females incubate 10-12 eggs, and the young leave the nest and feed themselves shortly after they hatch.

Pheasants are omnivores with diet varying by season. In winter, they eat mostly seeds, grains, roots, and berries, while in the summer they take advantage of insects, fresh green shoots, spiders, earthworms, and snails. Breeding hens and young chicks eat a greater proportion of animal matter than the rest of the population. While laying eggs, females eat large quantities of high-calcium snail shells.

This species has a large range, with an estimated global Extent of Occurrence of 10,000,000 km2. It has a large global population, including an estimated 6,100,000-8,300,000 individuals in Europe (BirdLife International in prep.). Global population trends have not been quantified; there is evidence of a population decline, but the species is not believed to approach the thresholds for the population decline criterion of the IUCN Red List (i.e. declining more than 30% in ten years or three generations). For these reasons, the species is evaluated as Least Concern.
Phasianus colchicus is a widespread resident across much of Europe, which accounts
for less than a quarter of its global range. Its European breeding population is very
large (>3,400,000 pairs), and was probably stable between 1970-1990. Although the
species declined in parts of north-central Europe during 1990-2000, most populations?
including the key one in the United Kingdom?were stable or increased. The status of
the truly wild population of this species in Europe is obscured by confusion with
introduced birds.
The natural breeding distribution of this species extended from the Caucasus to Manchuria, Korea and Japan. It was introduced in western Europe in Roman times, but in Greece it was perhaps already present as early as 1300 BC. In many regions of Europe it was introduced only at the end of last century or even at the beginning of the twentieth century. The total population of Western Europe is estimated at 3-3.5 millions of pairs, but the species is usually not very abundant in the Mediterranean regions. Regional densities vary according to the release of captive-bred birds (EBCC Atlas of European Breeding Birds). In northern Greece there is still a small population of the nominate race colchicus which origin goes perhaps back to Antique times. It amounts to only a few hundreds of individuals

Resident or sedentary in southern FSU (where indigenous), and in rest of Europe (where introduced). Severe weather leads to increase in mortality rather than movement. Flights not long sustained; recorded flying across 6- km of water, but such flights exceptional and in other cases birds have landed exhausted on water while attempting much shorter passages.