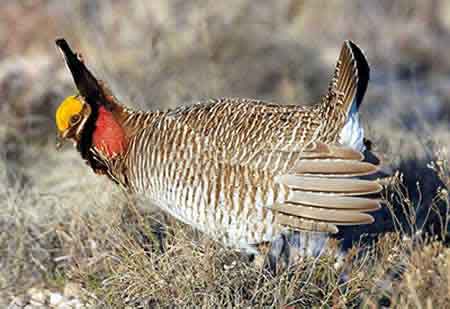 A small, pale prairie-chicken; best identified by range. The gular sacs of the male are dull purplish or plum-colored (not yellow-orange as in Greater Prairie-Chicken).

Sandhill country, sage and bluestem grass, oak shinnery.
Found in sandy short-grass prairie regions with scattered shrubs such as sand sage. Often found around stands of low, scrubby oaks (called “shin oak”). Regularly comes to agricultural fields to feed on waste grain, but disappears from areas where too muc
h of native prairie is taken over by farmland.

In spring, at dawn and in evening, males gather on “booming grounds” and display to attract females. Booming ground on slight rise or open ground, with good visibility. In display, male raises feather tufts on neck, stamps feet rapidly while making hollow
gobbling sounds; may leap in the air with loud cackles. Female visits booming ground, mates with one of the males.
Nest: Site is on ground, usually under shrub or grass clump. Nest (built by female) is shallow depression lined with a few bits of grass, weeds.
Eggs: Usually 11-13. Whitish to pale buff, finely speckled with brown and olive. Incubation is by female only, 22-24 days.
Young: Downy young leave nest shortly after hatching. Female tends young, but young feed themselves. Young can make short flights at age of 1-2 weeks, but not full-grown for several more weeks.

Includes seeds, acorns, insects, leaves.
Diet varies with season. Eats seeds and leaves of a wide variety of plants, including oak leaves and acorns. May eat much waste grain around agricultural fields in fall and winter. Eats many insects, including grasshoppers and beetles, especially in summ
er. Also eats some flowers, twigs, oak galls.
Behavior: Forages mostly on ground, sometimes above ground in oaks. May move several miles every day from roosting areas to good feeding sites.

This species qualifies as Vulnerable owing to a long-term and rapid population decline. Although most populations appear to have stabilized or increased since 1995, populations in north-east Texas and parts of Oklahoma have declined precipitously since 2005, and in south-east New Mexico since 2001. As the effects of drought and the increasing demand for both fossil fuel and renewable energy development (including wind and biofuels) continue to place remaining habitats at risk, the species is precautionarily retained as Vulnerable until positive trends have been sustained.
Croplands have expanded since the late 19th century and complete conversion is now the principal threat; areas with more than 37% cultivated land are probably unsustainable. Intensive grazing reduces food and cover, and herbicides reduce shrub cover and acorn production. Market hunting greatly reduced populations in the early 20th century. Numbers declined more severely in the dust bowl of the late 1930s, and significantly with droughts in the 1950s and early 1990s. Today, recreational hunting is limited to Kansas and Texas and the conservative seasons produce an annual harvest of fewer than 1,000 birds. In Oklahoma 39.5% of the prairie-chicken mortality recorded was due to fence collisions, while in New Mexico, this figure was 26.5 percent. The addition of tall structures (natural and manmade) to the prairie can reduce reproductive success.

Resident southwest of the range of the Greater Prairie-Chicken. Migration: No regular migration, but some may move many miles between summer and winter ranges.