Source to all birds on the Planet
admin
Galliformes, Latin America, Odontophoridae
Comments 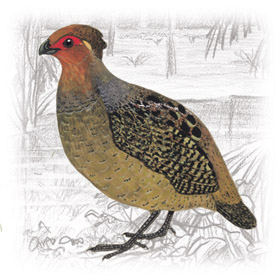 Birds of this species are stout, compactly built, and somewhat larger than the familiar Bob-white of North America. A formal description of its plumage is necessarily so long and intricate that it can leave no distinct picture in the reader’s mind; suffice it to say here that at a distance the bird appears to be clad in fairly bright brown, but close at hand it is seen to be beautifully variegated with browns and buffs, of .a bewildering variety of shades all exquisitely blended together, and flecked and vermiculated with black. The breast and abdomen are finely ,and irregularly barred with buff or cinnamon-brown and blackish. There is an erectile crest of long, deep brown
feathers. The lores and region about the eyes are bare of feathers, displaying bright orange-red skin, more extensive and somewhat deeper in hue on the male than on the female. The male is also slightly larger than the female. In both sexes the eyes are dark, the bill blackish, and the legs and toes plumbeous.

Listen to the sound of Marbled Wood-Quail

This species profits from a broad distribution in the areas located at the North of South America, in particular in Colombia, Ecuador, Brazil, Peru, Venezuela and in the Guianas. However, in Central America, the Northern limit of its range does not exceed the south of Costa Rica. It resides on the ground inside the thick rain forests on which it ventures sometimes in the adjacent secondary forests and of close shaded plantations. Taking into account its vast distribution, this bird can attend a large variety of landscapes, coastal low areas with an average altitude reaching 900 meter.

The nest is in a depression in the ground at the base of a mound of earth raised up by the roots of an uprooted tree, close beside the prostrate trunk. The hollow is completely roofed over with dead leaves, supported by small sticks intermixed with them, forming a spacious, well-sheltered nest chamber with a round entrance on the side that faces outward from the mound. Slight litter of fragments of dead leaves, bits of fine sticks and other particles of vegetation cover the bottom of the depression; and upon this scant carpet rested two white eggs, considerably below the level of the ground in front of the doorway. The leaves which cover over the nest blended with those scattered about over the ground and makes it difficult to detect the structure. The foliage of some low bushes growing in front screen the doorway and add to the security of the cleverly concealed nest. Of three nests two had four eggs which were incubated by the female only. Chicks are raised in small famuliy groups with several adults.

It usually moves around in single file, scratching the ground in search of seeds, fruits, snails, insects and small spiders.