Source to all birds on the Planet
admin
Galliformes, North America, Odontophoridae
Comments 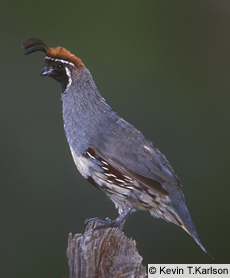 Replaces the California Quail in the deserts. Similar to that bird, but male has a black patch on a light, unscaled belly; flanks and crown more russet (a local name is “Redhead”). Female also lacks
scaly pattern on belly.

Listen to the sound of Gambels Quail

Brushy desert, canyons.
May be in very dry country, but concentrates near sources of water. Favors typical Sonoran desert, with open ground and wide variety of shrubs, low trees, and cactus; often around mesquite thickets. Avoids unbroken grassland
with no shrubs. May be common in open suburbs where some land is left undeveloped.

In breeding season, male gives clear descending note from high perch. Mated pairs explore territory, apparently prospecting for good nest sites.
Nest: Site is usually on ground, in shade of shrub or grass clump; sometimes above ground on stump or on old nest of thrasher or roadrunner. Typical ground nest is shallow depression lined with grass, leaves, twigs.
Eggs: 10-12, sometimes more. Dull white to pale buff, rather heavily marked with brown. Two females sometimes lay eggs in one nest. Incubation is by female only, 21-24 days.
Young:
Downy young leave nest within a day after hatching. Both parents tend young and lead them to food sources, but young feed themselves. Young can fly short distances at age of 10 days but are not full grown until later. 1 brood per year, 2 in years with go
od food supply.

Mostly seeds, leaves, berries.
Adults apparently are mostly vegetarians at most seasons. They eat many fresh plant shoots, leaves, and buds, especially during spring. Cactus fruits and the berries of mistletoe, hackberry, and other plants are eaten when available. Seeds are important
in the diet at all times. Usually few insects are eaten, although young birds may eat more.
Behavior: Forages in flocks from late summer to early spring. Does most feeding on ground, but readily goes up into shrubs and low trees for berries, leaves, buds.