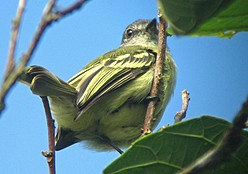 Myiopagis olallai is known from four areas along the eastern slopes of the Andes: three sites on the slopes of VolcÃ¡n Sumaco, Napo; near Zamora; at 1200 m above Bermejo in SucumbÃ­os province, Ecuador, and in ApurÃ­mac in southern Peru. It occurs between 890 and 1,500 m within and at the edge of very humid to wet primary submontane forest.
This habitat is being destroyed at an alarming rate in certain places along the eastern slope of the Andes. The true extent of the species’ distribution, and the extent to which habitat loss threatens it, need to be determined. A new species of New World flycatcher in the genus Myiopagis (Aves, Tyrannidae, Elaeniinae) is described from Andean submontane forest of eastern Ecuador and eastern Peru. It appears to be most closely related to M. caniceps of lower elevations and more distantly to M. gaimardii, with which it is syntopic. (Coopmans P, Krabbe N (2000) A NEW SPECIES OF FLYCATCHER (TYRANNIDAE: MYIOPAGIS) FROM EASTERN ECUADOR AND EASTERN PERU. The Wilson Bulletin: Vol. 112, No. 3 pp. 305-312)