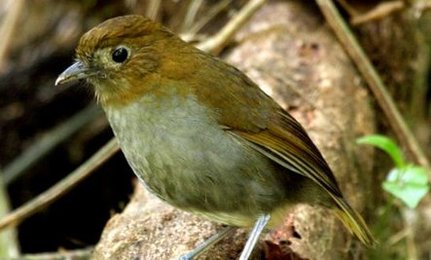 A new species of Antpitta Grallaria (family Grallariidae) is described from the ColibrÃ­ del Sol Bird Reserve situated on the southeastern slope of the PÃ¡ramo del Sol massif on the northern end of the Western Andes of Colombia. Fenwickâ€™s Antpitta Grallaria fenwickorum sp nov. most closely resembles Brown-banded Antpitta G. milleri, which is endemic to the Central Andes of Colombia, but it has a slate grey breast, lacking the brown breast band and flanks of G. milleri. The song of the new species involves three notes of increasing length and acoustic frequency. The individual notes are shorter, lower and of a different note shape compared to G. milleri. In addition, the new speciesâ€™ call is shorter and lower pitched. Fenwickâ€™s Antpitta is restricted to upper montane cloud forest (2,600-3,300 m) where territories are largely restricted to Chusquea bamboo thickets. Its habitat has undergone extensive clearance for pasturelands. The known population is of 24 territories with an estimated extent of occurrence of 5.8 km2, giving a cautious global population estimate of 57-156 territories. We propose that the IUCN treat the new species as Critically Endangered. Although protected in the Colibri del Sol reserve, it is in need of further conservation actions.
The new bird species inhabits a highly restricted area of montane cloud forest where dwarf bamboo thickets thrive on rich volcanic soils on the less-humid eastern-facing slopes; a habitat that has undergone extensive clearance for pasturelands in recent decades. The bird has been proposed as Critically Endangered under IUCN-World Conservation Union criteria, with a population described as extremely small and of great conservation concern, making it a priority for ABC.

Fenwickâ€™s Antpitta is a medium-sized, cinnamon and gray colored, thrush-like bird, with a height of about seven inches, and a weight of only about two ounces. G. fenwickorum is considered probably most closely related to Brown-banded Antpitta G. milleri due to similarities in voice and biometrics and generally non-descript plumage. There are two described subspecies of G. milleri: G. m. milleri occurs 165 km southeast in the Central Andes, and the larger G. m. gilesi occurs 70 km east in the northern sector of the Central Andes. G. fenwickorum can be easily diagnosed from both taxa by the complete lack of a brown breast band (with the breast instead being uniform slate grey) and lighter brown dorsal plumage. Its vocalizations are also distinct.

The song of Grallaria fenwickorum consists of three notes, progressively increasing in acoustic frequency and length, with the first note briefest and lowest, and the final note longest and highest. The song could be transcribed as: “tu, tuut, TUUET”. The song of G. milleri is similar to that of G. fenwickorum, also comprising three notes of progressively higher pitch and greater length. However, each note of the G. milleri song is diagnosably longer and higher pitched than the equivalent note in G. fenwickorum.