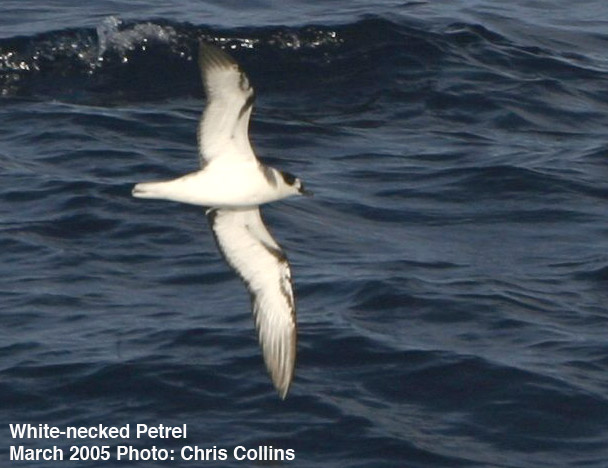 A new species of petrel has been described, based on specimens collected at sea. The Vanuatu Petrel Pterodroma occulta, is closely related to the White-necked Petrel Pterodroma cervicalis but is smaller, with a longer tail and different primary colours. It is presumed to breed in the Banks Islands or elsewhere in northern Vanuatu and has reached north-east Australia, so it is likely to be a transequatorial migrant. This species, newly described and named here as Pterodroma occulta, is close to P. cervicalis but differs mainly in its smaller size, relatively longer tail and entirely dark grey exposed primaries ventrally. The latter character may assist identification at sea, though 2 of 21 P. cervicalis studied (9.5%) were similar. Its breeding places are still unreported, though presumed to be in northern Vanuatu. Both this new species and White-naped Petrels, P. cervicalis, evidently occur in eastern Australian seas. This species resembles the White-necked Petrel, Pterodroma cervicalis, but is slightly smaller at 40 cm length and 300-350 g weight. It has a black cap, white rear neck, dark grey back, wings and tail, and a darker rump. The underparts are white with dark bases to the primary feathers. Like White-necked, the upperparts of worn birds become darker. (Pterodroma occulta, M.J.Imber and A.J.D.Tennyson,2001, Emu,101(2),p.126.).
← Previous Post
Next Post →