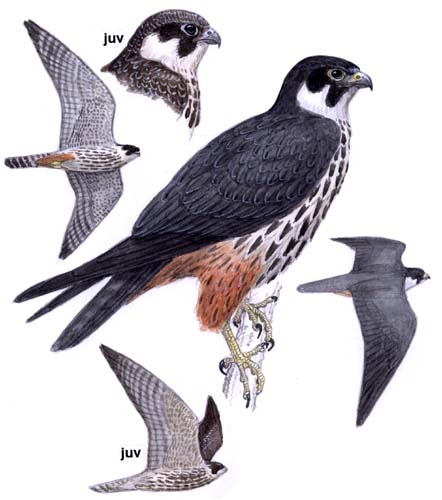 Listen to the sound of Hobby

Among smaller west Palearctic Falco, only Kestrel spans broader band of latitude, but presence limited to little more than one-third of the year through its high dependence on aerial insect prey, abundant only during the warmer months. Although ranging on occasion almost to tree-limit, northward through taiga even beyond Arctic Circle, and in Asia up to 3050 m in mountain forests, mainly a lowland species, tending to avoid coastlines and islands, extensive wetlands, steppes, deserts, and all kinds of open treeless country. Extensive dense forests, narrow alpine valleys, and sunless rainy or misty regions such as moorlands on the oceanic fringe also shunned. Preferred habitats usually warm, biologically rich enough to sustain plenty of large flying insects, with ample open expanses of low vegetation completed by clumps, groves, or lines of tall trees, or fringed by mature woodland with clearings, glades, or slopes affording relatively inaccessible nest-sites with unobstructed view. Lack of gregariousness while breeding, and readiness when necessary to hunt far from nest, enables areas of low prey biomass to be occupied in west Palearctic breeding range, in contrast to Red-footed Falcon and Lesser Kestrel, with which frequently co-exists in African winter quarters. Here all 3 species gather to feed on swarms of flying termites which emerge after tropical rainstorms, rising to 600 m or more and often getting wetter than most native birds of prey of the region would tolerate. Savanna, sparse woodland, grassland, and cultivation preferred in winter.

The Hobby mostly breeds for the first time at two years old. They will usually nest in old crows nests, often in trees. Height above ground ranges from under 6 m to 32 m. Rarely nests on cliff tops. Egg-laying is often in June, with around 3 eggs laid. Egg laying from early June in north-west Europe. In southern part of range, including North Africa, laying from middle of May; in central Europe, earliest birds laying 2nd week May. Incubation takes around 28-31 days. The young are fully fledged in 4-5 weeks and fully independent between 4-6 weeks later. The young are often lost to crows nesting in the area.

Territorial and usually solitary when breeding; occasionally 2 or more pairs nest in loose, well-dispersed clusters, each pair holding separate nesting territory. Aerial activity in breeding territory involves many spectacular flight displays, principally by male, though these largely of unfixed pattern and occasional. If male arrives back on territory at start of season before female, makes both low circling flights over tree-tops and high soaring flights above site, often calling excitedly, and will fly up high with prey in talons. When female returns, male flies in circles round her, calling in great excitement. If pair arrive back together, female also takes part in advertisement flights.

Mainly birds and insects; occasionally bats, small ground mammals, and reptiles. Opportunist feeder on flying insects and birds, hunting chiefly in open sky; exploits local abundances. Often active in evening taking birds flocking at roosts, and insects, and (more rarely) bats; hunts exceptionally by moonlight. Prey seized in feet in fast, controlled flight; in downward stoop, level flight, or often in upward swoop at end of dive (latter a regular method, presumably of unsighting or confusing victim and, in late twilight, of using sky to silhouette prey). Insects taken high in air, in low-level flight, and in sallies from look-out perch; more rarely, captured on ground. Birds taken in stoops and chases high in air, or in sudden dashes at tree-top or roof-top height, or low over reedbeds, nesting colonies, etc. Takes wide range of birds, but again tends to favour open sky species such as Swift, martins and swallows, larks, and pipits and wagtails especially in their high song-flights; also open-country flocking species such as sparrows and finches.

This species has a large range, with an estimated global Extent of Occurrence of 10,000,000 km2. It has a large global population estimated to be 400,000 individuals (Ferguson-Lees et al. 2001). Global population trends have not been quantified; there is evidence of population fluctuations (Ferguson-Lees et al. 2001), but the species is not believed to approach the thresholds for the population decline criterion of the IUCN Red List (i.e. declining more than 30% in ten years or three generations). For these reasons, the species is evaluated as Least Concern.
Falco subbuteo is a widespread summer visitor to much of Europe, which accounts
for less than a quarter of its global breeding range. Its European breeding population
is relatively small (<120,000 pairs), but was stable between 1970-1990. Although there were declines in certain countries-most notably Germany and Finland-during 1990-2000, populations were stable or increased elsewhere in Europe, and the species probably remained stable overall. 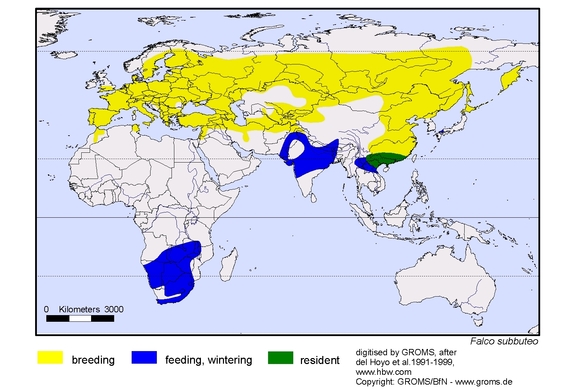