Source to all birds on the Planet
admin
Alcedinidae, conservation, Coraciiformes, Identification
Comments

Java Blue-banded Kingfisher (Alcedo Euryzona) is a “new” species split of from nominate status to full species status in 2013. This Java endemic kingfisher is firmly bound to rivers in lowland forest which is lost in an alarming rate throughout its range. There is only one sighting known, in 2009, since the thirties, the population is extremely small and declining. In sight of its very remote and inaccessible habitat it might be under recorded and therefore more numerous.

It is a 17 cm medium-sized river kingfisher with dark blackish upperparts with silvery-azure streak from mantle to rump. Long, white neck-flash with rufous tip. White throat becoming yellow-buff on the sides; rest of underparts mostly pale yellow-buff in male and orange in female. Both sexes show a solid blue band across the chest. The congenetic species Alcedo peninsulae of Borneo, Sumatra and Malaysia is whiter below and the pale blue breast band in the male is mottled white, while the female shows no breast band and is a brighter orange below. 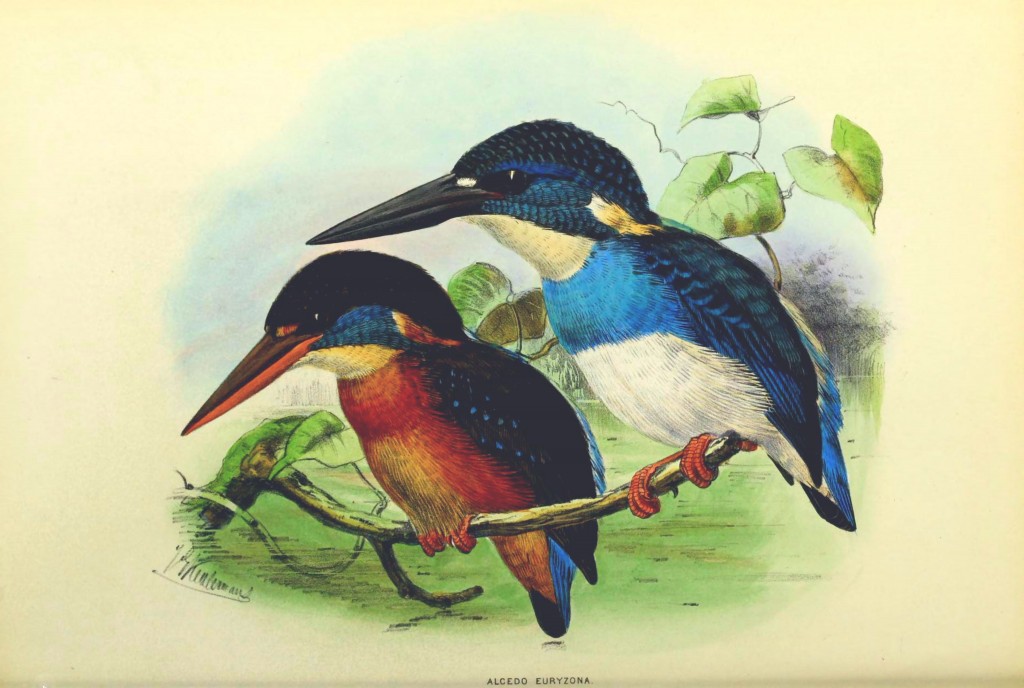 Alcedo euryzona is endemic to Java, Indonesia, where apparently the only record since the 1930s is a report of one seen in Gunung Halimun National Park in June 2009.

Given the lack of recent records, any remaining population is inferred to be extremely small, and an estimate places the population in the band 50-249 mature individuals. Rates of forest loss in Java have been rapid and are continuing, hence the population is suspected to be declining rapidly as a result.

It is generally sedentary on rocky or slow-flowing streams and larger rivers running through forest (usually humid evergreen, but also back-mangroves and mixed dipterocarp-dominated forest), most commonly in the lowlands, but ascending locally to 1,500 m. It is predominantly piscivorous, but also consumes crustaceans, insects and small reptiles. Breeding has been recorded in March-April, but also later.

The human population on Java brings a massive reduction in forest cover, particularly in the lowlands. This threat continues in the form of conversion to agriculture, development and uncontrolled fire, even within protected areas. Measures to be taken are to clarify its current distribution and population status. Where is it? The species must be surveyed in hill forest and lower montane areas.

Del Hoyo in his HBW writes this species might be able to survive on higher altitudes where the destruction of habitat is less extensive. This could also be the reason it may be under-recorded surveys. Already in 1868 Sharpe wrote the following about this species:

This is a very rare species in collections, and I am greatly indebted to Professor Schlegel for lending me specimens from the Leiden Museum for figuring in the present work. I know of only one example in this country, which is in the British Museum ; and I have entirely failed to procure a single bird for my own collection. My friend Mr. W. T. Fraser, of Soerabaya, has done his utmost to get me specimens; but the success which has waited on his kind endeavours as regards the other species of Javan Kingfishers has not attended him in the present instance, for he writes to me that on only one occasion has he met with the Broad-belted Kingfisher, and then he had not his gun at hand. He rushed off for the latter at once, but unluckily on his return the bird had flown.

The nearest ally to the present species is Alcedo grandis, but the resemblance is only in form ; for neither in this nor in any other species of the genus Alcedo is there such a vast difference in the young and adult birds as is exhibited in Alcedo euryzona. It would seem to imply that the bird is ratner a recent species on the face of the globe, and that the species from which it was originally evolved was a true Alcedo in style of coloration and form, traces of the original ancestor being preserved in the young plumage of the bird of the present day. I can give no details of the habits of the present species, but it doubtless resembles our Common Kingfisher in this respect. The figures are taken from specimens lent to me from Leiden by Professor Schlegel. The adult bird described and figured is Temminck’s original type, which was procured in Java by S. Muller ; the young bird was brought by Dr. Horner from Sumatra.

Birdlife, the major source of many posts of Planetofbirds writes the following:
“Blue-banded Kingfisher Alcedo euryzona has been split into A. euryzona and A. peninsulae, following the application of criteria set out by Tobias et al. (2010). Prior to this taxonomic change A. euryzona was listed as Vulnerable under criteria A2c+3c+4c on the basis that it was suspected to be undergoing a rapid population decline as a result of habitat loss throughout its range.

A. euryzona (as defined following the taxonomic change) is endemic to Java, where it occurs along forested streams and rivers, predominantly in lowland forest. It is Critically Endangered, it probably has an extremely small population (likely to number fewer than 250 mature individuals) as there have been no confirmed records for several decades, probably forming a single subpopulation, and is inferred to be in decline owing to continued habitat loss and degradation.

A. peninsulae occurs in the Thai-Malay Peninsula, Sumatra and Borneo, where it is found along forested streams and rivers, predominantly in lowland forest. It may qualify as Vulnerable owing to on-going habitat loss and degradation, as well as disturbance.”

On the above picture the adult male is procured in Java, the female from Sumatra. They are male and female of different species, the breastband of the male is not mottled (Euryzona) and the female has no blue breastband (Peninsulae). To the 19th century procurers there seemed to be little difference in both species. In the Red Book of Asia a map (below) shows where this elusive species was reported. The little white dots on Java mean historic observation (pre-1950). The one square means undated. Evidently all the information about habitat, breeding behavior is inferred, based on congenetic comparison. In the Red Book of Asia several references are made to the species’ preference for elevated habitat, and some challenges stating it may hunt along montane streams but lives in lower elevations. 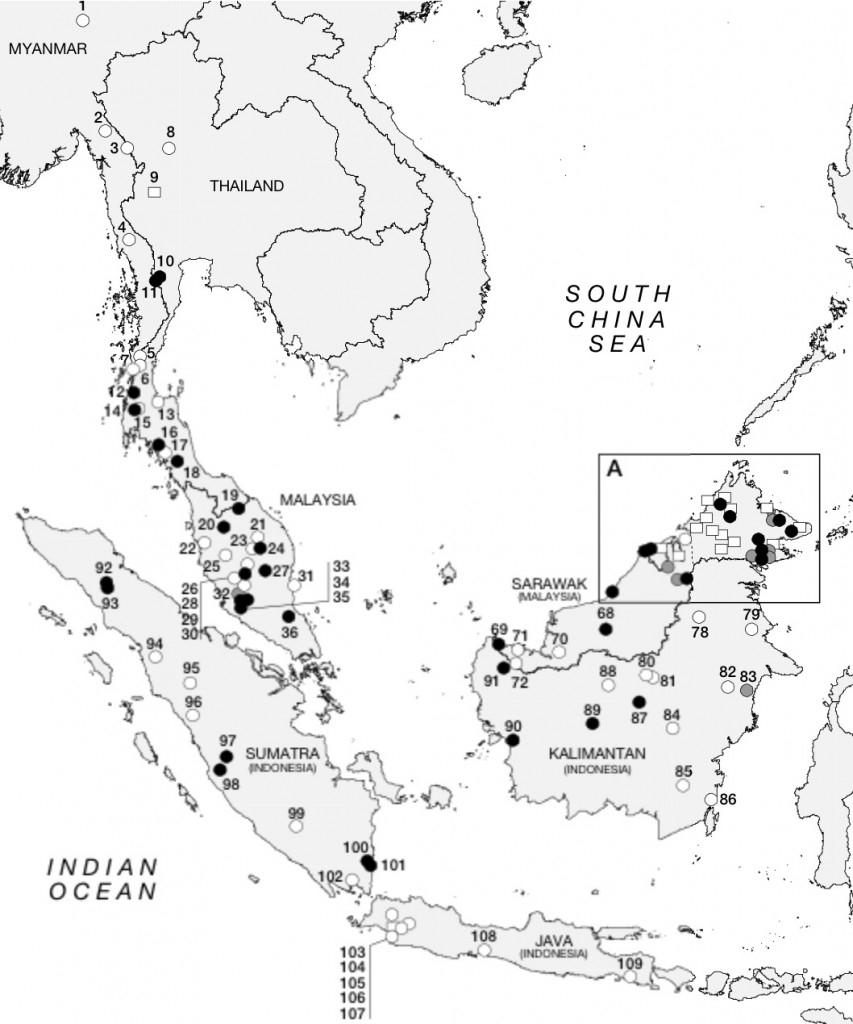 Java map of A. Euryzona

To sum up the lumped Alcedo Euryzona always has been a rare bird, even in times when human ecological pressure was much less, even in lower elevations. On Java there seems to be no tangible evidence of the existence of a congenetic species, other than a few museum speciemens. The only recent record is a 2009 observation in a National park (in the picture near the dots where 103-107 are plotted).
A theory is that this species’ habitat choice is more elevated (mountainous) compared to the congeners, that is, genetically, not just ecological. It now has been split to the “Java-form” of the Blue-banded Kingfisher, a new species of which no hard evidence exist. Both species have little difference other than a male less mottled or female paler chestband. Sharpe already in 1868 mentioned the striking difference between the young and adult form in what he called the Broad-belted Kingfisher.

Given the fact that the very sparse specimens available may be of any age and the total lack of sustained visual evidence, we really doubt if the Java Blue-banded Kingfisher is a viable species. Splitting it may well be a good conservation measure, but that should not be the main reason of creating a species. In our opinion the Java Blue-banded Kingfisher does not exist other than a variety (or even morph) of now A. Peninsulae (or vice versa).