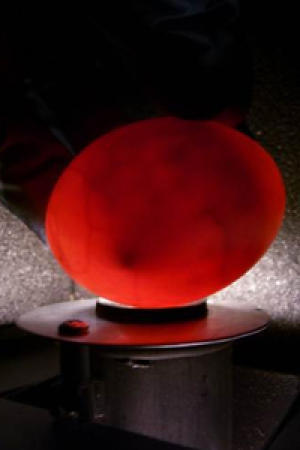 ScienceDaily (July 22, 2011) â€” After collecting weathered crude oil from the Gulf of Mexico following the Deepwater Horizon oil spill, researchers at The Institute of Environmental and Human Health (TIEHH) at Texas Tech have reported that only 8 to 9 percent coverage on the shells of fertilized mallard duck eggs resulted in a 50 percent mortality rate.

However, scientists also reported the amount of time the oil remained at sea and exposed to weather had a significant effect on its toxicity to the fertilized duck eggs, said Phil Smith, an associate professor at TIEHH. They published their findings in Environmental Toxicology and Chemistry, the peer-reviewed flagship journal of Society of Environmental Toxicology and Chemistry (SETAC).

“If you can imagine a duck egg with about 10 percent of its surface area coated with this particular substance we found in the Gulf, you would expect about half of the bird embryos to die, according to our study,” Smith said.

Because the timing of the Deepwater Horizon oil spill coincided with nesting periods for large numbers of Gulf Coast birds, Smith said researchers were interested in discovering the toxicity of the crude oil that was floating offshore and coated about 600 miles of beaches and marshlands.

Using a standardized method for examining the oil’s toxicity, 160 eggs were treated with varying amounts of crude oil collected off the coast of Alabama about a month after the Deepwater Horizon oil spill.

“These kinds of studies have been conducted for about 40 or 50 years,” he said. “It’s not a novel or unique method for evaluating the toxicity of any kind of crude oil. What is novel about our approach is we went out to the Gulf and collected crude oil that was available during the spill. This method allowed for a realistic exposure scenario among bird eggs on the Gulf Coast during that time period. In that respect it’s somewhat unique.”

“By the time that oil made it through dispersant and was transported to the coast, it had degraded significantly,” Smith said. “Birds that were exposed to oil in the Gulf may have transported it back to their nests and subsequently exposed incubating eggs in nests. The weathering process made it less toxic to bird embryos. That doesn’t discount the fact that the weathered oil was a significant physical hazard to the adult birds, but that wasn’t the focus of our study.”

Smith said about 61 percent of the treated eggs died. Among those that hatched, the researchers found no significant differences in deformities or malformations when compared to the control group.

“This study provided toxicity values for this particular oil to assist in risk and damage evaluations and reaffirmed that weathered crude oil is less toxic than fresh crude oil,” Smith said. “Recent evidence in fish studies points to potential developmental effects that could result in reduced fitness traits that do not become manifest until later in life. Aside from acute lethality, it would seem important to evaluate potential for developmental or latent effects in birds exposed while still in the egg.”