Not more than a century ago English farmers thought it necessary to sow barley when the earliest note of the cuckoo was heard in order to insure a full crop.

In Russian folklore the Erzians from Mordovia the story is that the cuckoo was destined to become a domestic bird, however, at first it promised and then refused to fulfil the wish of Ange Patiai, the goddess-patroness of marriage, health, women in childbirth and infants, to lay eggs each day. Due to this, the cuckoo was punished and ousted from the human dwelling to the forest. In addition, the goddess did not allow the cuckoo to build its own nest and ordered it to lay its eggs in the nests of other birds. In order for the cuckoo to remember the broken promise, Ange Patiai made the cuckoo and its eggs speckled. Since then, it cuckoos sadly in the forest.

In the west of Scotland, on hearing the cuckoo for the first time, pull off your shoes and stockings, and, if you find a hair on the sole of the left foot, it will be the exact colour of the hair of your future spouse. If no hair is found, then another year of single life must be endured.

In Westphalia, Germany the peasants, on hearing the cuckoo for the first time, roll over and over on the grass, and by so doing insure themselves against lumbago for the rest of the year. This is, considered all the more likely to happen if the bird repeat his cry while they are on the ground.

The spirit of a dead man from Serbia was detained in misery on earth because his sister was perpetually weeping at his grave. At last he became angry at her unreasonable sorrow, so he cursed her ; whereupon she was immediately changed into a cuckoo (Kukavitza), and now she has enough to do to lament for herself.

In Albania there were once two brothers and a sister. The latter accidentally killed one of them, by getting up suddenly from her needlework and piercing him to the heart with her scissors. She and the surviving brother mourned so much that they were turned into birds ; he cries out to the lost brother by night Gjon, Gjon and she by day Ku Ku, Ku Ku, which means Where are you?

There is a childish legend current with us, if not popularly believed, that a certain old woman of irascible temper has charge of all the cuckoos, and that in the spring she fills her apron with them, and, if she is in a good humour, allows several to take flight, but only permits one or two to escape if anything has happened to sour her temper. Some think that at a certain period the cuckoo changes into a hawk. 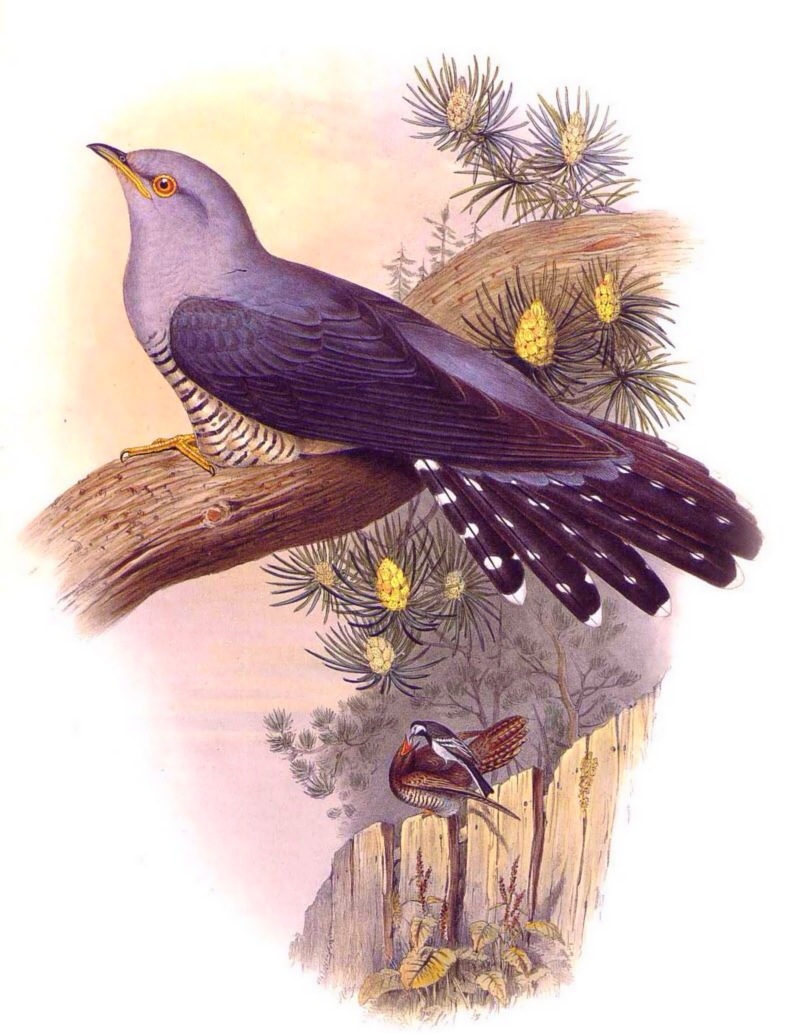