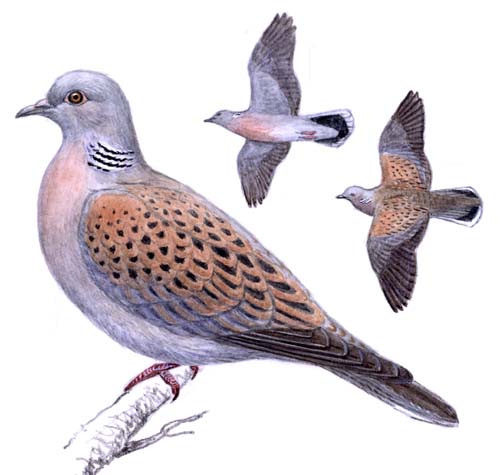 Listen to the sound of Turtle-Dove

May in Europe. Nest is flimsy platform of small twigs, lined with grass stems or roots and leaves, placed in a tree, shrub or hedge. occasionally uses old nests of other birds. 2 eggs, incubation 15 days.
Has a refractory period (when unresponsive to stimuli) following breeding, unique among all pigeons so far studied. First breeding at 1 year old.

Diet based on seeds and fruits of weeds and cereals. Seeds taken include those of Brassica, Chenopodium, Fumaria, Helianthus, Medicago and Triticum.
Berries and fungi are occasionally eaten, also earthworms, some insects and small snails. Although largely arboreal, finds most of its food on the ground.

Migratory, with possible exception of some Saharan breeding birds. Essentially a summer visitor to Palearctic, wintering in Africa: in semi-arid Soudanian and savanna zones from Senegal and Guinea to Sudan and Ethiopia, and as far south as northern Ghana and northern Cameroun.
Leaves European breeding areas late July to September (adults and juveniles together), with stragglers into October; passage broad-front (with south-westerly orientation in Eurasia), but also some suggestion of partial concentration for Mediterranean crossings. Migrants from western Europe recovered especially in south-west France and Iberia (but not Galicia), and enter Africa through Morocco. Many also cross Balkans and Italy at both seasons, to enter or leave Africa via Tunisia and Libya. On Malta, up to 20 000 per day at peak spring passage (fewer in autumn) and c. 100 000 shot there annually. Numerous oases records, sometimes involving large falls, show Sahara crossed at many points and probably on broad front. Most disappear from south of Sahara in March and first half of April, though small numbers summer there. Main northward passage through Mediterranean in second half of April, with breeding areas reoccupied during May.