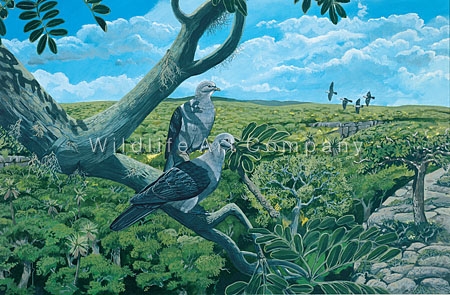 This species is known from bones discovered on Rodrigues during the 1870’s and described by Alphonse Milne-Edwards, the celebrated expert on fossil birds at the Paris museum. Milne-Edwards described the species primarily on the evidence of a sternum, and chose to assign it to the genus Columba, whereas later researchers have shown an inclination to place it in the genus Alectroenas, alongside the extinct pigeon of Mauritius Alectroenas nitidissima. Either designation may be correct.

This is another of those rather mysterious birds that seem to have been observed in life by the Huguenot refugee Francois Leguat. He wrote:
The pigeons here are somewhat less than our own [European pigeons] and all of a slate colour, fat and good. They perch and build their nests upon trees; they are easily taken being so tame, that we have had fifty about our table to pick up the melon seeds which we threw them, and they lik’d mightily…they never built their nests in the Isle, but in the little Islets that are near it. We suppos’d ’twas to avoid the persecution of the rats, of which there are vast numbers in this Island.

Presumably this description can be correlated with the evidence of the bones. Leguat’s account clearly indicates two factors that contributed to the species’ extinction tameness and the depredations of rats.