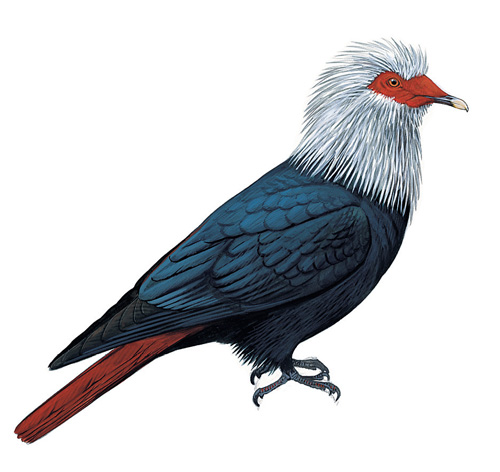 When the first Dutch mariners landed on Mauritius, they were hungry after weeks at sea on meager rations. Naturally, they caught Dodos and ate them. Soon, however, they tired of the rather tough meat on these easily caught creatures and turned their attentions to smaller, tastier birds. Among those that they mentioned particularly were small pigeons and these seemed to provide a welcome alternative to the cloying flesh of the Dodos. A remarkable pair of illustrations drawn in Mauritius and dating from 1601 show a dead individual of the species. It is in the journal, or log, of one of the first Dutch ships to visit Mauritius and, although anonymous, the pictures are brilliantly and expressively rendered. This journal is now kept at the Rijksarchiv in the Hague and it relates to the voyage of the ship Gelderland.

Despite the existence of the journal, almost two hundred years were to pass before the species was formally described and brought to zoological attention. In 1782 Pierre Sonnerat mentioned a specimen of the bird that he had collected in 1774, during his extensive travels to the East. However, as he did not adhere to the Linnaean principle of scientific naming, it was left to Giovanni Antonio Scopoli some four years later to give it its scientific name.

This striking pigeon, with strange wax-like, elongated head and neck feathers, is now represented in the world’s museums by just three specimens, one in Mauritius itself, one in Paris and one in Edinburgh. The living bird, with its peculiar headdress and beautiful colouring, must have been a remarkable sight, contrasting markedly with the three dingy, antiquated stuffed examples that survive. These specimens date from the last part of the eighteenth century and the first decades of the nineteenth, the most recent having been collected in 1826. Soon after this date the species seems to have become extinct. Given the early disappearance of so many Mauritian birds it is perhaps surprising that this pigeon lasted so long.

Julien Desjardins, a specimen dealer who spent many years on Mauritius and who received the 1826 specimen, provided the only information of the bird in life. He described how it lived alone near riverbanks and fed on fruit and freshwater molluscs.