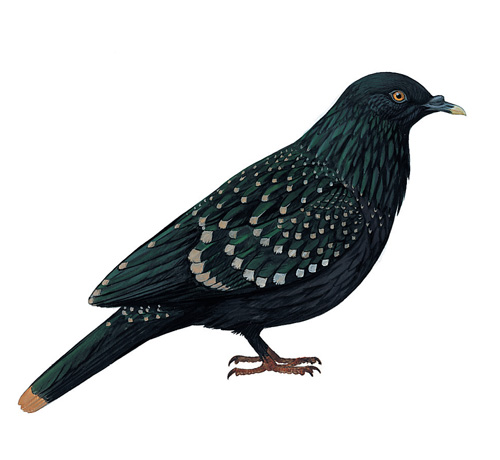 Two hundred years ago there were two specimens of this species in existence. Now there is just one. No-one knows where it came from or when it was collected, although this was certainly at some time during the last half of the eighteenth century. The specimen is now in the collection of the Liverpool Museum, and it has been there since 1851, when it was bequeathed to the people of Liverpool by Edward Stanley the 13th Earl of Derby.

Stanley was one of the great collectors of the nineteenth century, a period that is rightly celebrated for the collecting zeal that inspired so many rich men. Not only did he collect preserved birds and other animals, he also collected live ones, and the menagerie he put together in the grounds of his home, Knowsley Hall, became famous throughout Europe. The Earl collected hundreds of pictures and albums of pictures relating to natural history and commissioned the famous artist Edward Lear to paint portraits of the animals in his menagerie. He assembled a magnificent library and acquired two copies of what is now the world’s most valuable illustrated book, Audubon’s Birds of America (a copy of this work recently changed hands for 8,000,000 pounds), one of which he promptly cut up to make a scrapbook featuring pictures of “birds of the world”! Considering its antiquity, his specimen of the Liverpool Pigeon is in a remarkably fresh state of preservation.

In appearance, the bird shows affinity to the widespread Nicobar Pigeon (Caloenas nicobarica), but notwithstanding the similarity it is clearly distinct. For reasons that are not entirely clear, the specimen has been overlooked by many commentators and there has been a tendency among those who do know of its existence to regard it as a freak. Few of these have actually seen it, however. It is assumed that the specimen was brought back from an expedition to the South Pacific and that the species inhabited a Pacific island – but this is just a guess. Obviously, nothing is known of the living bird.