Source to all birds on the Planet
admin
Columbidae, Columbiformes, North America
Comments 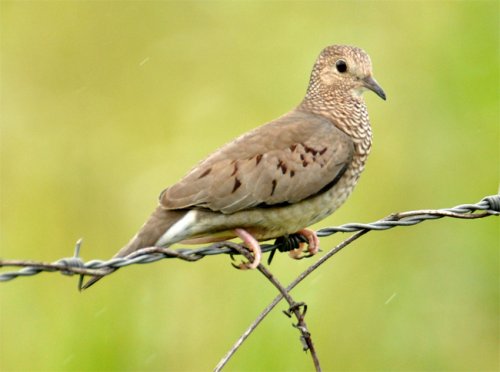 These tiny doves are generally brownish grey above and somewhat paler below with scaled breast and nape. The forehead and cheeks are pale pinkish, and the crown and hindneck are scaled bluish-grey. The black tipped bill is red at the base. Legs and feet are red. The short rounded tail has a black terminal bar thinning toward the center of the tail, and the outer tail feathers are tipped with white. At rest the wings show dark brownish bars and spots. In flight the bright rufous underwings and black-tipped rufous primaries of the upper wings are distinctive

The nest is a fragile, shallow platform of stems and grasses placed in a low shrub, cactus, or palm, or occasionally on the ground. Ground-Doves are not averse to reusing their own nest, or that of a cardinal or thrasher. The female lays only two eggs at a time. However, she may produce several clutches over an extended breeding season, which can last from February to November, depending on food availability. As in other dove species, the parents feed their nestlings regurgitated food, or “pigeon milk.” The young develop rapidly. They are capable of flying when they are 11 days old and are capable of breeding at three months of age.

The Ground-Dove is often encountered foraging on the ground for seeds, small berries, and occasional insects

Sedentary, although most Northern population may migrate South due to harsh weather conditions.