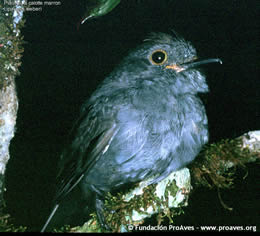 Lipaugus weberi is confined to a small area of forest (c.800 km2) on the northern slope of the Central Andes in Colombia1, where it is known from five locations. The area lies between the Porce and NechÃ­ river valleys, where it is presently known from four localities in the Municipality of AnorÃ­1. The species is locally common at the known localities in AnorÃ­, especially between 1,600 and 1,750 m. It is much less common near Amalfi, presumably because the forests in this area have been subjected to exploitation for a longer period of time. It inhabits primary pre-montane, wet forest between 1,500 and 1,820 m. It has been seen at forest borders and in secondary vegetation near mountain gorges, but not usually within secondary forest. Birds occur singly within the midstorey to Lower canopy, and are sometimes observed in mixed-species flocks in the higher levels of the canopy. It feeds on small to medium-sized berries and, occasionally, large invertebrates. The Central Andes have undergone almost complete ecological change – surviving forested areas are now highly fragmented and isolated. Pre-montane forest cover is estimated to be 3-4% of its original extent1, and the species is presumed to have been extirpated from a large part of its range. Forest loss is driven by mining and agriculture, in particular coffee, plantain and cattLe. Moreover, current high rates of colonization will increase deforestation in the area. High acidity and poor soil drainage reduce vegetation succession and accentuate problems of soil erosion. Afforestation with exotic species is an increasing problem in the area. (Cuervo, Andres, Salaman, P., Donegan, T.M. & Ochoa, J.M. 2001. A new species of piha (Cotingidae: Lipaugus) from the Cordillera Central of Colombia. Ibis 143: 353-368).
download discovery article
← Previous Post
Next Post →