Source to all birds on the Planet
admin
Antarctica, Charadriiformes, Stercorariidae
Comments 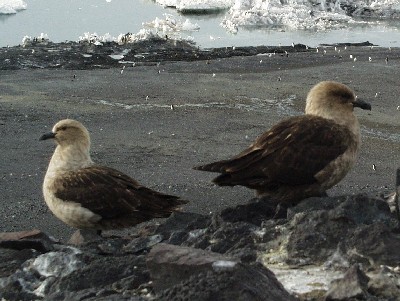 Near size of Western and Herring gulls, but stockier, with a deep-chested, hunch-shouldered look. Dark, with a short, slightly wedge-shaped tail and conspicuous white wing patch.
“Blond” phase is much paler on head and underparts than dark phase. Flight strong and swift; harasses other seabirds. Dark jaegers may lack tail points, but skuas’ wings are wider, with more striking white patches.

Listen to the sound of South Polar Skua

Antarctica : coasts. South Polar skuas are circumpolar and abundant, mainly around the continent and the peninsula. They range far over the polar ice. While adolescent birds may disperse as far as the North Pacific and Atlantic Oceans, the adults remain closer to the breeding grounds through the austral winter.

Open ocean.
Ranges widely at sea, over both warm and very cold waters. Appears far off North American coast where there are concentrations of other birds from which to steal food. Almost never seen from shore on this continent. Nests in Antarctica, on islands and ma
inland, on barren ground.

Courtship involves much posturing and calling; male feeds female. Usually first breeds at age of 5-
6 years; birds usually have same mates and same nest sites every year thereafter. In aggressive display near nest, both wings are raised together over back, head extended forward while bird gives harsh calls.
Nest: Site is on ground. Nest is simple scrape in soil or moss; often begun by male and completed by female.
Eggs: 2, sometimes 1. Olive to brown, blotched with darker brown. Incubation by both sexes, but female does more. Incubation period 24-34 days, usually 28-29.
Young: Both parents feed young, by regurgitation. Young may leave nest soon after hatching, wander in immediate vicinity. Although both eggs usually hatch, usually only one young survives to fledging. Age at first flight 49-
59 days.

Mainly fish. Diet in North American waters not well
known, but feeds mostly on fish while at sea. On breeding grounds, some feed mainly on the eggs and young of penguins, and on carrion around penguin colonies.
Behavior:
Forages at sea by plunging into water from flight, or by seizing items while sitting on surface. Often steals food from other seabirds: may grab a shearwater or gull with its bill and shake the other bird violently to make it disgorge its catch.

Antarctic. Wanders into North Atlantic as far as Greenland and in North Pacific as far as Aleutians. Summer skuas off East Coast may be this one. Migration:
From Antarctic nesting grounds, moves far to the north in both Atlantic and Pacific. Perhaps most common off southern California in late spring, off northern California in early fall, and off New England in early summer, but details still poorly known.