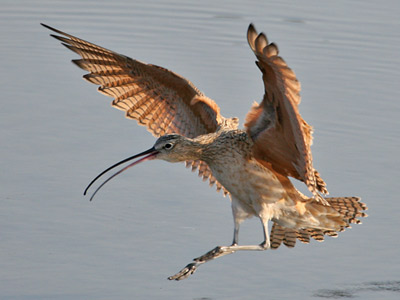 Note the very long, sickle-shaped bill (4endash 8 1/2 inches). Much larger than the Whimbrel and more buffy; lacks the bold crown stripes. Overhead, shows cinnamon wing linings.
In young birds the bill may be scarcely longer than that of the Whimbrel.

Listen to the sound of Long-billed Curlew

High plains, rangeland. In winter, also cultivated land, tide flats, salt marshes.
Breeding habitat is mostly native dry grassland and sagebrush prairie. May nest in pastures that are not too heavily grazed, rarely in agricultural fields. During migration and in winter often in farm fields, marshes, coastal mudflats, in addition to gra
sslands. Even on immediate coast, may favor lawns or grassy areas.

Mostly insects. On grasslands, feeds mostly on insects, including beetles, grasshoppers, caterpillars, many others; also eats spiders, toads, and someti
mes the eggs and young of other birds. May eat many berries at times. In coastal areas, also eats crabs, crayfish, mollusks, marine worms, other large invertebrates.
Behavior: Forages by walking rather quickly over grassland or mudflats, using long bill to reach ahead and pick up insects or to probe just below the surface of mud or soil. Seldom probes more deeply.