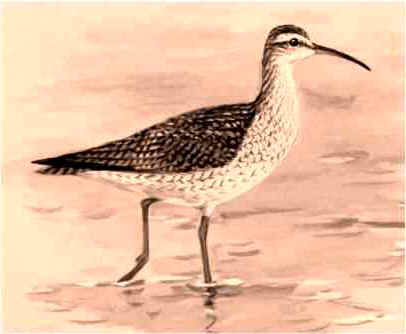 Nesting probably occurred in June. Nests were located in open areas on the ground and are difficult to locate. They were made of wisps of dried grass or leaves. The eggs are green with brown splotches. This species’ specific incubation behavior is unknown. It is not certain which sex if not both incubated, and what the specific timeline was. These birds evidently did not attack intruders approaching their nests, which provides reason to believe that their nests were far apart from each other.

Eskimo Curlews picked up food by sight, as well as feeding by probing. They ate mostly berries while on the fall migration in Canada. During the rest of their migration and on the breeding grounds they ate insects. Snails and other invertebrate were also part of their diet during migration.

This species has not been recorded with certainty since the early 1980s (and none have been confirmed on the wintering grounds since 1939). It was formerly abundant, but declined rapidly over a century ago as a result of hunting and habitat loss. However, it cannot yet be presumed to be Extinct until all potential breeding areas have been surveyed, and the series of occasional unconfirmed reports ceases. Any remaining population is likely to be tiny, and for these reasons it is treated as Critically Endangered (Possibly Extinct).
Numenius borealis bred at (and presumably between) the Bathurst peninsula and Point Lake in Northwest Territories, Canada. Birds migrated across Hudson Bay to Labrador (and New England, USA), and through the Caribbean to Argentina (especially the Pampas), and possibly Uruguay, Paraguay4, southernmost Brazil and Chile south to Patagonia. The return migration was probably along the Pacific coast, through Central America, across the Gulf of Mexico to the Texas coast and northwards through the prairies. It probably numbered hundreds of thousands, but declined rapidly in the 1870s-1890s to become very rare in the 20th century. The last irrefutable record was of a specimen collected in Barbados in 1963, but there is an accepted record of a flock of 23 in Texas in 1981. Since then there have been no confirmed records (none from the wintering grounds in South America since 1939), only several unconfirmed reports during 1987-2006. The population (if one persists) must be tiny.