Source to all birds on the Planet
admin
Charadriiformes, North America, Recurvirostridae
Comments 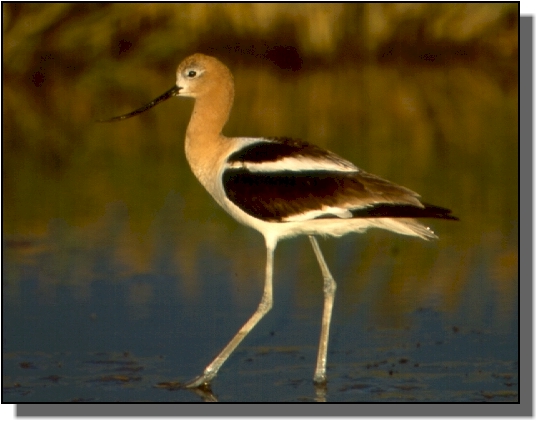 A large, slim shorebird with a very slender, upturned
, somewhat godwitlike bill, more upturned in the female. This and the striking white and black pattern make this bird unique. In breeding plumage, the head and neck are pinkish tan; in winter this is replaced with pale gray. Avocets feed with a scything s
weep of the head and bill.

Listen to the sound of American Avocet

Typically nests in colonies, sometimes mixed with Black-necked Stilts. If predators approach colony on foot, several adults may fly to a spot some distance away and perform distraction display there, running about in a crouch with both wings spread. If
eggs or young are directly threatened, adult avocets may fly straight at an intruder, calling loudly.
Nest: Site is on bare open ground, not far from water. Nest (built by both sexes) may be a simple scrape in soil, a scrape lined with pebbles and other debris, or a mound built up to more than a foot tall.
Eggs: 4, sometimes 3-5. Olive-buff, blotched with brown and black. Incubation is by both parents, 23-25 days.
Young: Downy young leave nest soon after hatching, find all their own food. Both parents tend young. Age at first flight about 4-5 weeks.

Mostly small crustaceans and insects, also some seeds.
Feeds on abundant tiny creatures that live in or near shallow water. Diet includes many aquatic insects, small crustaceans. On western lakes may feed heavily on brine shrimp and brine flies.
Behavior: Forages in a variety of w
ays. Often sweeps head from side to side, with upturned tip of bill barely submerged in shallow water, finding food by touch. Also picks items from surface of water or mud, or plunges head into water; sometimes snatches flying insects as they pass.

Breeds southwestern Canada, western United States. Winters from southern United States to Guatemala. Migration:
Most migrate to the coast (or to valleys of California) in winter. Some migrate well to the east, wintering along much of Atlantic Coast, with flocks of non-breeders remaining through the summer there.