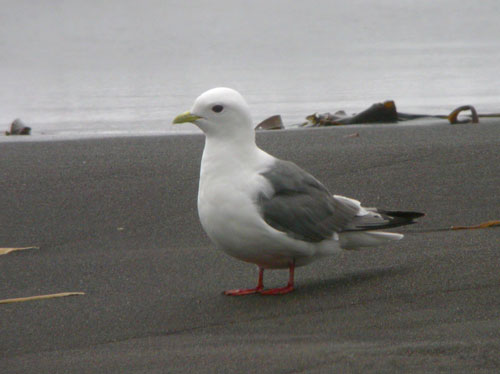 Listen to the sound of Red-legged Kittiwake

Ocean, islands. At sea f
ound mostly over deep water, at and beyond edge of continental shelf. May forage farther from nesting colonies than Black-legged Kittiwake. Especially in winter may be very far from land, in North Pacific or near edge of pack ice in Bering Sea. Nests on l
edges of steep cliffs above sea on islands.

Breeds in colonies, associated with other seabirds. Courtship displays at nest site involve lowering head with bill open, making “choking” motions.
Nest: Site is on ledge of vertica
l cliff, often smaller ledges than used by Black-legged Kittiwake. Nest (built by both sexes) is shallow cup of mud, grass, kelp. Same site may be reused each year, although nest must be rebuilt after effects of winter storms.
Eggs: 1, sometimes 2. Variable, gray to buff or greenish, with blotches or scrawls of brown. Incubation by both sexes, probably about 30 days; may incubate slightly longer than Black-legged Kittiwake on Pribilofs.
Young: Both parents care for young, brooding them for first two weeks after hatching, feeding them by regurgitation. Young capable of flight at about 37 days; may return to nest to be fed for at least several more days.

Fish, squid, crustaceans. Feeds mainly on lampfish, pollack, squid, and small crustaceans such as amphipods. Fish eaten are mostly under 4″ long.
Behavior: Forages by dipping to surface of water or
plunging into water from flight low over surface. Often forages in flocks, mixed with Black-legged Kittiwakes, over schools of fish. Red-legged Kittiwake has larger eye, possibly adaptation to feeding in dim light; may feed by day or night. Some food ite
ms such as lampfish and squid may be closer to surface at night.

This species is listed as Vulnerable owing to a rapid population reduction in the last three generations (44 years). Trends in the main population appear to have stabilised and, unless declines recommence the species may warrant downlisting to Near Threatened in future.

Red-legged Kittiwake’s breeding distribution is limited to just four localities in the Bering Sea: Alaska’s Pribilof Islands, Bogoslof Islands, and Buldir Island, and Russia’s Commander Islands. More than 75% of the species’ known population breeds on St. George Island in the Pribilofs. During the breeding season, Alaskan breeders can be found in the Bering Sea within 120-150 kilometers of their nesting sites. During the winter months, most of these birds are believed to leave the Bering Sea, but their exact whereabouts is not well-known; most sight records come from the northern Gulf of Alaska, or near the ice edge in the southeastern Bering Sea. Russian breeders winter in the northeastern Pacific Ocean.
.