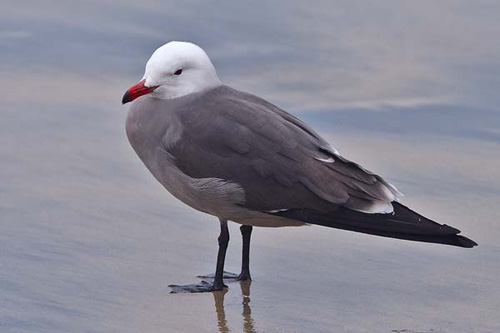 The easiest gull in the West to identify. Adult: Dark gray, with a black tail, whitish head, red bill. In winter the white head becomes gray. Immature is all dark, lacking the white head; bill brown or tipped with varying amounts of red.

Listen to the sound of Heermanns Gull

Coast and nearby open ocean.
Favors the immediate coast, including beaches, rocky shores, estuaries, coastal lagoons, offshore kelp beds. Unlike some other coastal gulls, seldom visits freshwater ponds or garbage dumps even a short distance inland. May occur far offshore, out of sight of land.

Breeding behavior not well known. Nests during spring in colonies on islands off west coast of Mexico. Some colonies very large; only a few scattered nesting records on U.S. coast. Courtship involves posturing and calling by both sexes; male feeds female.

Nest site is on level ground, usually in colony on island. Nest (probably built by both sexes) may be a shallow scrape in soil with very little lining, or a more substantial cup of grass and weeds, lined with feathers.
Eggs: 2-3. Variable in color, pale gray to blue-gray, blotched with brown, lavender, olive. Incubation by both sexes, probably about 28 days. Adults incubate eggs in cool temperatures, shade them during day; eggs could easily overheat in intense sun of hot desert islands.
Young are fed by both parents. Age at first flight not well known.

Fish and other small marine life. Eats many small fish, also crustaceans, mollusks, insects. Sometimes eats eggs of other birds, refuse, or carrion. Forages in flight over sea, dipping to surface or plunging into water for fish. Pirates much food from other birds: steals fish directly from bill pouch of pelicans, harasses other birds to force them to drop or disgorge their catch. Also will take eggs of other birds and will scavenge refuse or carrion, but seems to do so less than some gulls.

This species is considered Near Threatened as it has a highly restricted breeding range, with 90% of the world population breeding on a single small island. Populations fluctuate widely in response to climatic events, although these fluctuations are less than one order of magnitude. It is likely to be at high risk from catastrophic events or local anthropogenic changes, and should be carefully monitored.

Breeds mainly on islands off coasts of northwestern Mexico. Post-breeding visitor along West Coast, casual or accidental inland. Post-breeding visitor along coast within dash line. Moves north along our Pacific coast after nesting, first appearing in numbers in late May, remaining common until early February when most return to Mexico. Some may also disperse south of nesting areas along Mexican coast.