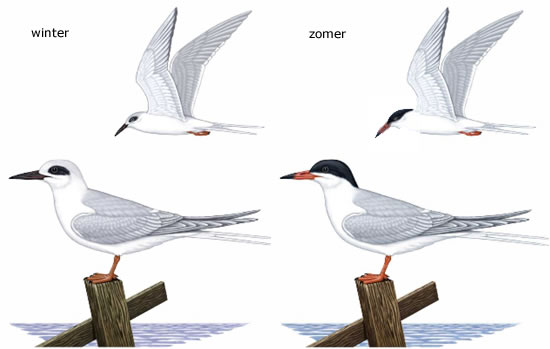 The Forster’s Tern is a medium-sized, primarily white tern with a black cap and dark eyes. The back and wings are a pale silvery-gray, contrasting with the white of the neck and belly. The primaries and the deeply forked tail on the breeding adult bird are also a pale gray, with the primaries appearing as white as they become worn. During the breeding season, the large bill is orange and tipped in black, and the legs are bright orange or orange-red. In non-breeding plumage the bill is black and the legs are a duller red-brown. During non-breeding season, the primaries are dark silvery-gray and the crown is white with an evident large black patch encompassing and extending behind the eye. The bird is approximately 33 cm in length with a 79 cm wingspan. White wings and underparts give the Forster’s Tern a lighter and brighter overall appearance than the Common Tern. The Forster’s is also distinguishable from the Common Tern by its longer and stouter bill, longer tail, and more orange, rather than red, colored bill

Listen to the sound of Forsters Tern

Large marshes with extensive reed beds or muskrat houses that provide nesting structures are the preferred breeding habitat for the Forester’s Tern. It is also occasionally found along marshy borders of lakes and reservoirs. The species generally nests colonially, with as many as five nests recorded on one muskrat house. Preferred nesting locations include both nesting and foraging sites within close proximity.Nesting sites are mostly on permanent bodies of water, or on temporarily flooded site

Often nesting atop muskrat houses or on gravel islands, Forster’s Terns form loose colonies ranging in size from less than 500 to up to several thousand and sometimes associate with Yellow-headed Blackbird colonies. When Forster’s Terns and Black Terns nest in the same marsh, the Forster’s Terns choose higher and drier ground for their nests. Both sexes help build the nest, a platform of reeds and grasses, with a hollowed-out center lined with finer materials and shells.
This tern produces eggs from late May to mid-June. Both sexes incubate the clutch of usually 3 to 4 eggs for about 23 to 24 days. The eggs are subelliptical to oval, smooth, non-glossy and very pale, tinted olive or cream, spotted or speckled in brown, blackish-brown, or gray and average 32 x 23 mm. The semi-precocial young are tended by both adults until capable of flight, fledge at 3 to 4 weeks, and remain with the parents well into the fall. The Forster’s Tern often renests if the first nest is lost; this often occurs at coastal nesting sites as a result of tidal flooding.

These terns feed on insects (e.g., dragonflies, caddisflies) which are caught in the air or snatched off the surface of the water (e.g., dead beetles) while the tern is in flight. The Forster’s Tern also dives into water for fishes, mainly submerging the bill and a portion of the head, though sometimes the entire body is submerged below the surface of the water

Migratory in north, but no more than dispersive in southern breeding area (Gulf of Mexico). 2 discrete breeding populations: (1) inland in prairies of Canada and USA, migrating extensively overland, mainly towards Pacific and Gulf of Mexico; (2) along east and south USA seaboard (Maryland to Texas), with migratory elements following coasts. Combined winter range: central California to Guatemala, Virginia to Florida and thence west through Gulf of Mexico to eastern Mexico.