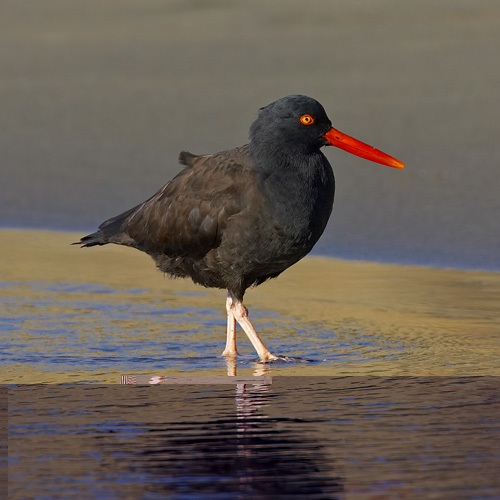 A large, heavily built, blackish shorebird, with a straight red bill, flattened laterally. Legs a pale flesh color. Immature may have a black tip on the bill.

Listen to the sound of Black Oystercatcher

May mate for life. Almost always nests on islands. Pairs typically defend breeding territory that includes both an elevated area for nesting and an adjacent feeding area in intertidal zone.
Nest: Site is on ground well above high tide mark, on gravel, grassy area, or depression in rock. Nest (built by both sexes) is slight scrape, with sparse lining of pebbles, pieces of shell.
Eggs: 2-3, sometimes 1. Pale buff to olive, spotted and scrawled with brown and black. Incubation is by both parents, 24-29 days.
Young: Downy young remain near nest at first; parents take turns guarding the young and going to get food for them. Older chicks follow their parents to feeding areas and ar
e fed by them there. Young can fly at age 5 weeks or older; are fed by parents for some time thereafter.

Mostly mussels, limpets, marine worms.
Feeds mostly on mussels where they are abundant; also limpets, marine worms, crabs, beetle larvae. Young birds, newly independent, may eat fewer mussels at first, perhaps lacking the skill to open them.
Behavior:
Finding a mussel with its shell slightly open, the oystercatcher jabs its bill into the opening, cutting the muscles and then cleaning out contents. Probes in mud, and pries limpets off of rocks. When feeding on mussel beds, typically removes the mussel
from its shell and leaves the shell in place.

Resident from western Aleutians (Attu), east and south along coast to Morro Bay, California; on offshore islands to Baja California. Migration:
Mostly permanent resident. No regular migration, but wanderers away from breeding areas are most likely to be seen in spring and fall.