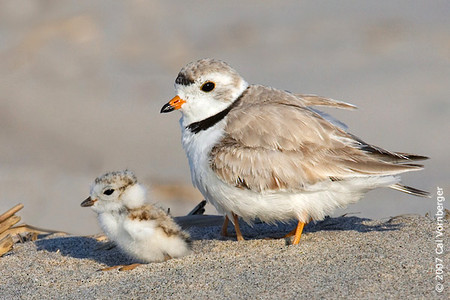 As pallid as a beach flea or sand crab–th
e color of dry sand. A complete or incomplete dark ring around the neck. Legs yellow or orange; bill yellow with a black tip. In non-breeding plumage, the black on the collar is indistinct or lacking and the bill is black. Note the tail pattern.

Listen to the sound of Piping Plover

Sandy beaches, tidal flats.
Nests in open sandy situations near water, in a variety of settings: beaches along Atlantic Coast and Great Lakes; sandbars along major rivers on northern Great Plains; gravel or sand flats next to alkali lakes. Winters along coast, on tidal flats and
beaches.

Males perform courtship flights over breeding territory, with slow wingbeats and piping call note. On the ground, male approaches female, stands upright with neck stretched, rapidly stamps feet with odd high-stepping gait.
Nest: Site is on open ground some distance from water, often with large rock or clump of grass nearby, but no direct shelter or shade. May nest very close to breeding colonies of terns. Nest is shallow scrape in sand
, sometimes lined with tiny shells and pebbles.
Eggs: 4, sometimes 2-3, rarely 5. Pale buff, blotched with black and dark brown. Incubation is by both sexes, averages 26-28 days.
Young: Downy young leave nest a few hours after hatching. Young feed themselves. Both parents brood young during cool weather at first, but female often deserts within a few days, leaving male to care for them. Young able to fly at 21
-35 days.

Includes insects, marine worms, crustaceans.
Diet not well known. On coast, feeds on marine worms, small crustaceans, insects, other marine invertebrates. Inland, feeds mostly on insects, including small beetles, water boatmen, shore flies, midges, and many others.
Behavior: Forages by running and pecking rapidly at tiny items on the surface of the shore. Probably finds most food by sight (bill is too short for much probing). Sometimes trembles one foot over very wet sand, perhaps
startling small prey to the surface. Sometimes feeds at night.

This species has a small population which has declined significantly since the 1950s. However, there have been overall population increases since 1991 as a result of intensive conservation management, so the species is listed as Near Threatened. It is still dependent on intensive conservation efforts, so if these cease, or if trends reverse, then it would warrant immediate uplisting again.

Breeds southern Canada
to northeastern and central United States. Winters southern Atlantic and Gulf coasts. Migration:
Most birds from northern plains and Great Lakes probably winter on Gulf Coast. Not often seen in migration; may travel from breeding to wintering grounds in one nonstop flight.