Source to all birds on the Planet
admin
Charadriidae, Charadriiformes, Eurasia
Comments 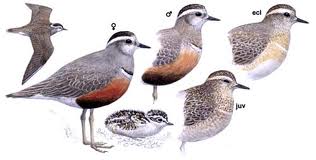 Listen to the sound of Dotterel

The length of the egg-laying season varies from year to year but usually starts the last week of May. Breeds solitary, but where suitable habitat is restricted breeds in loose neighbourhood groups 2-5 pairs. Usually feeds outside territory on neutral grounds.
Nest in short vegetation or on bare gravel or soil. Shallow scrape, lined with moss, lichens or leanes. The latest clutches are finished in mid-July. During egg laying, the birds continue to copulate. Clutch size is from 2-4, mostly 3. In the Dotterel the male is attending the young and incubates (23-29 days) the eggs. No sexual behavior on the part of incubating males after egg laying at their nests was finished. In early nests, the male is in sole charge of the incubation, but, in nests started later than mid-June,
the female frequently assists. Females never incubate alone.
Young from two clutches were observed flying at the ages of 24 and 26 days, respectively. Females were never observed attending chicks. Temales lay two clutches in one season and that males accept new clutches after nest predation.
While the male is incubating the female engages in extensive sexual behavior, showing frequent and prolonged dsiplay behavior. Also copulating did not stop after egg laying.
The females seek new mates during a large part of the season by the display flights. Shedid not attend to male or young. However, later in the breddding season while having a second clutch, the female attended incubation and after hatching shared caring for the young. The occurrence of this phenomenon only in the late clutches indicates that, as the prospects for further matings and successfully raising broods decrease late in the season, females may increase investments in late clutches by taking
part in the incubation instead of continuing to seek mates.
Sexual role reversal is a prominent feature in Dotterels. The female is seasonally monogamous, serially polyandrous and occasionally polygynous, depending on local sex ration.

This species has a large range, with an estimated global Extent of Occurrence of 1,000,000-10,000,000 km2. It has a large global population estimated to be 49,000-210,000 individuals (Wetlands International 2002). Global population trends have not been quantified, but the species is not believed to approach the thresholds for the population decline criterion of the IUCN Red List (i.e. declining more than 30% in ten years or three generations). For these reasons, the species is evaluated as Least Concern.

Migratory. Migrates in broad front across Europe, staging at few, often traditional, sites. Many birds probably migrate non-stop, especially to autumn. On autumn migration females usually precede juveniles and males by 2-4 weeks, and also tend to return first to breeding grounds. Birds depart from Scottish Highlands first half Aug, Siberia from late Aug to early Sept; passage W Europe mid-Aug to late Sept; some birds stage in Alps at altitude 2000-3000 m or on crest of Jura Mts at 1600m; many stage to moult in N Caspian region, migrating further S until Nov; birds arrive in winter grounds from early Sept. Spring migration begins late Feb to Mar, passing W Europe mid-Apr to mid-May and Ukraine mid-Mar to late Apr, returns to breeding ground in Scotland early May, S Scandinavia middle to late May, and Lapland and N Russia late May to mid-Jun. Despite vast and discontinuous breeding range no indication of subspeciation; this is in accordance both with limited faithfulness to breeding sites, which may be due to mixing in winter quarters, and with erratic breeding in Europe. During migration sometimes in flocks of 20-80 birds, but usually 3-6.