Source to all birds on the Planet
admin
Alcidae, Charadriiformes, Eurasia
1 Comment 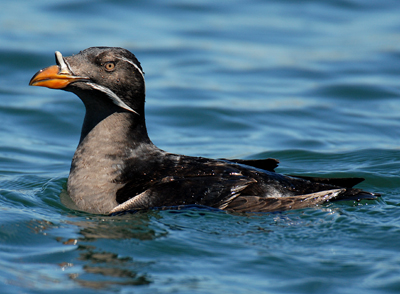 Listen to the sound of Rhinoceros Auklet

Ocean, rip currents; nests in burrows on islands.
Often far from land, but may feed close to shore, especially where tidal currents near islands cause upwellings or concentrations of food. In winter flocks may spend night on coastal bays, flying farther out to sea to forage by day. Nests on islands, in
burrows in soil under grass, shrubs, trees.

Breeds in colonies, mostly on islands. Generally active around colonies only in evening and at night, although at some colonies the adults visit by day as well. Courtshi
p displays include members of pair nibbling at each other’s bills. Advertise ownership of nest site by standing upright, with wings partly opened, pointing bill up and hissing.
Nest: Site is in burrow in ground, typically on slight slope covered with grass, shrubs, trees, sometimes in steep slope or cliff. Burrow up to 20′ long, usually 5-
10′, with one or more side branches. Nest is in chamber in burrow, a shallow cup of moss and twigs.
Eggs: 1. White, usually spotted with brown and gray. Incubation is by both sexes, 39-52 days, average 45 days.
Young: Both parents feed young, carrying fish in bill to nest. Young leaves nest about 7-8 weeks after hatching.